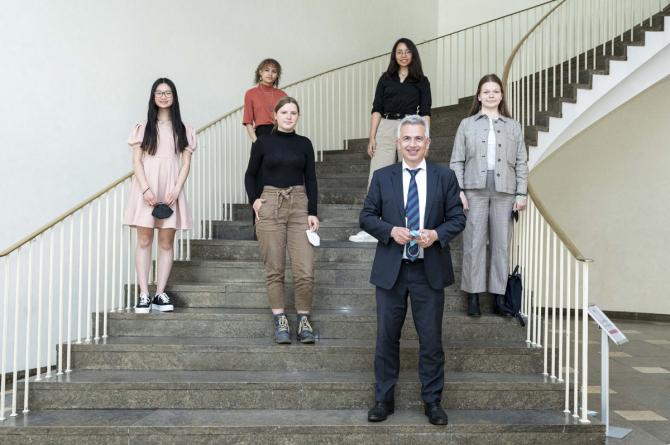 (10.06.2021) Five Frankfurt schoolgirls will take part in the “Young Women into Leadership” program from July 26th to August 2nd, which will help girls between the ages of 14 and 16 develop or improve leadership skills, train presentation and speaking skills and become independent .

In addition, the program offers the opportunity for cultural exchange, because it is organized by the city of Birmingham, which has invited its nine partner cities – including Frankfurt – to participate. On Tuesday, June 8th, the five women from Frankfurt, who will represent their city at the event, visited Lord Mayor Peter Feldmann in the Römer and spoke to him about the advancement of women and equality.

The mayor gave Sophie and Ha Thu from the Schillerschule, Ida from the Schule am Ried, Angelina from the Elisabethenschule and Carolina from the Goethe Gymnasium, who each came with one parent, an insight into the promotion of women in the city of Frankfurt, so that they could participate to support. “The basis for the advancement of women is the Hessian Equal Rights Act. This results in the women’s promotion and equality plan, which relates to the situation of the city administration. The departments are supported in the implementation of equality officers, ”explained Feldmann. Overall, 55.16 percent of the city’s employees are now women. Women also make up half of executives, said the mayor: “Just under 51 percent of our office lines are women. For department heads, the figure is 41 percent; at the functional level, 48 percent of managers are women. This is a good trend: We are building up the representation of women in management positions on a sustainable basis – especially at the top management level. “

There are many opportunities in the city for women to develop professionally and personally, including taking on management positions. The area of ​​work-life balance is well covered in the further training courses – for both women and men.

“I hope that I was able to show you some aspects of working with ‘Young Women into Leadership’. On the one hand, it is a pity that the event can only take place online this year. On the other hand, I am also pleased that you are still offered an opportunity to exchange, ”said Feldmann to his guests. “I am glad that young women from Frankfurt are given the opportunity to take part in the initiative of our twin city, to receive further training and to exchange ideas with other girls and women.”

Birmingham is Frankfurt’s second oldest twin city – the two cities have been sisterly since April 19, 1966. There is a lively exchange between their administrations, associations and parishes. The Schule am Ried and the Carl-Schurz-Schule also offer student exchanges with schools in Birmingham. (ffm)