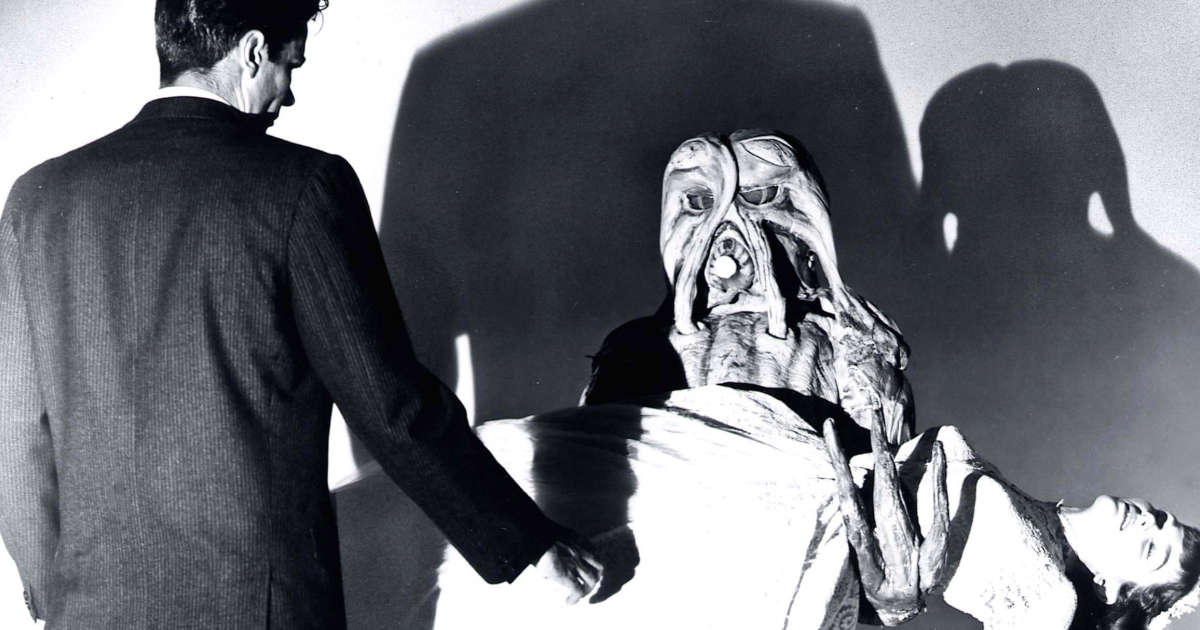 It was the obsession, the terror of the fifties: the Martians, who strolled in Manhattan dressed in stove pipes or in Death Valley dressed in Bouygues 4G antennas, were in the process of conquering the Earth, on the sly, after having hypnotized the stepmother of the bartender of San Fernando and having inflicts final contempt on the wife of the sheriff of Tombstone, Arizona. They had laser eyes, sweetbread faces, rotten rattling voices, and sometimes you could see the lobes of their giant brains. They were coming from afar. They came from the hall of the Omnia Paramount or the Excelsior Montmartre, or even from the Midi-Minuit, a hall specializing in the bizarre. In “Flying Saucer Films of the 1950s”, John Abbott (author of “The Elvis Films”, “One Hundred of the Best, Most Violent Films Ever”, essential books) tracks down movie aliens, those barbarians from the far reaches of the cosmos in brushed aluminum flying saucers.

READ ALSO> The book that made a stinky movie

It all started with “The Flying Saucer”, in 1950, five-star nanar by Mikel Conrad (with Mikel Conrad): sixty-nine minutes during which a detective and his alcoholic assistant, accompanied by a nurse named Nanette, investigate cases in Alaska. bizarre rumors. UFOs have reportedly been seen in the area, it’s suspicious. The detective sows cigarette butts, but Russians follow him and kill lots of people (they’re Russians, eh) and, for lack of a script, you never see the Martians. On the other hand, we can clearly see Alaska, via stock-shots bought in bulk. The director, Mikel Conrad, son of a wealthy family, had the brilliant idea of ​​founding his own fan club, and sent himself letters of encouragement. He later relocated as an actor in “Untamed Women” (a coma pilot wakes up in the dinosaurs), perfecting his destiny as an outright nanardeur. But he was the first to use the term ” Flying saucer “ at the cinoche. Respect, therefore.

In “The Man from Planet X” by Edgar Ulmer (ex-decorator of Max Reinhardt in Vienna), the Martians swing a sound so high that it turns people into zombies, which is not important. What is, on the other hand, is Margaret Field’s bra (Sally Field’s mom), which gives her ultra-sharp breasts – lethal weapons by flailing invaders. The sets of the film are taken from “Joan of Arc” (with Ingrid Bergman) and the fog machine helps the actor (Bond … Raymond Bond) to camouflage his expression of permanent pure terror (his lace is undone?).

In “The Day the Earth stood Still” by Robert Wise, the aliens land in Wahington, and propose peace on Earth by saying « Klaatu barada nikto », which means “Cool, guy”. The hero of Jack Arnold’s “It came from outer space” smokes a pipe – so he’s a real writer. In addition, he is filmed in 3D (in 1953, yes!) And faces an out-of-space monster that looks like a melted marshmallow, with acne. The one in Joseph Newman’s “This Island Earh” has camel’s feet, crab claws for hands, and no head box: his brain is bare. The heroine finds it sexy (the organ of seduction, women often say, is the intellect. Well yes, but here I have doubts).

READ ALSO> Mafia, drugs and bedtime: the not very clear memories of a Hollywood producer

In « Earth vs the Flying Saucers ”by Fred Sears, the Martians threaten the Eiffel Tower, and let’s not forget“ Plan 9 from Outer Space ”, Ed Wood’s masterpiece, where the flying saucers are materialized by cars, and where Bela Lugosi, who plays a small role, was replaced at short notice by the director’s masseur (he looked nothing like Bela Lugosi, but he had to manage, Lugosi having fallen dead after two days shooting). I like, too, Gene Fowler’s “I Married a Monster from Outer Space,” where the Martian has a mop head soaked in oil. The heroine (Gloria Talbott) wonders why she is not pregnant. Considering the layout of your bedroom (censorship at the time required married couples to sleep in separate beds), honey, you don’t stand a chance.

Inept, distressing, hilarious: the films listed in John Abbott’s book are a treat, a feast of made in USA bullshit. Frankly, these Americans are crazy. Definitely.