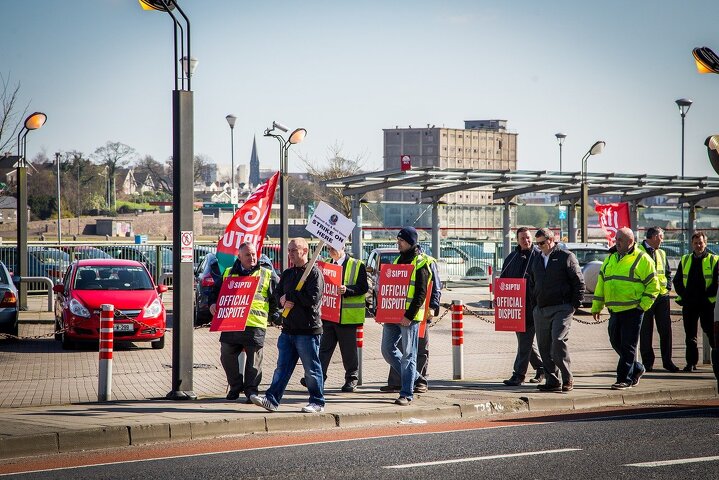 Since 1985, trade union membership across OECD countries decreased on average by half… Businesses are aggressively pursuing well-funded anti-union campaigns and engaging most of the media and think tanks. Overall, these efforts have clearly succeeded in limiting traditional rights and the representation of workers. While employer-sensitive “right to work” legislation has undermined the ability of unions to finance self-financing, the widespread use of “contract labor” (as in India) has created a sprawling class of workers with no job security or benefits, many of whom work alongside permanent workers. employees.

Global competition, automation and market concentration all weaken the bargaining power of the workforce. But the collective strength of the workers is also undermined by internal fragmentation. There is a clear division between manufacturing and transportation on the one hand, and the service sector, retail and care services on the other.

In developing countries, the fragmentation of the labor force is much deeper due to the gap between the formal and informal sectors. In countries such as India, Kenya and Peru, the vast majority of workers are employed informal activities without any benefits and social protection. Because these workers are often self-employed, labor organizations rarely respond to their needs for credit and marketing services, health and childcare, and legal and insurance services. (There are exceptions such as the Self-Employed Women’s Association, the largest informal workers’ organization in India.)

With the development of the gig economy, more workers in rich countries are also left without social protection and receive minimal assistance to meet their individual needs. Unions in Germany are trying to expand the availability of work-friendly customer testimonial sites as gig workers rely heavily on online testimonials to get jobs. In the US, small companies are entering the market to provide gig workers with affordable insurance or paid sick leave. German IG Metall, Europe’s largest industrial union, opens yourself for self-employed workers; The independent UK workers’ union is also increasingly trying to reach out to gig workers.

Internal labor fragmentation is also a consequence of the organization of trade unions. In the United States and India, union formation is so decentralized that corporate employers can easily block or weaken nascent organizational efforts. In the aftermath of their defeat, union organizers in Bessemer acknowledged that they needed to move their organizational efforts to the industry level – as is the case in Europe, where individual companies have less incentive or leverage to hold back unions – and mobilize Amazon customers against the company’s labor practices. In recent unionization efforts, the primary demand was less wages than the company’s use of robots and monitoring algorithms to establish a continuous pace of work.

In some countries, the severity of the pandemic appears to have sparked an upsurge in some forms of unionization. Given the relatively high average age of old-style union members, organizers are trying to update their practices, for example by using social media and work networks to engage the millennial generation with online petitions and messages to address non-physical workplace issues. … Even better qualified and highly paid young workers are increasingly concerned about the lack of job security.

See Also:  Who and when will contest the NCAA National Championship?

In New Zealand, where the labor market was strongly separated from unions in the 1990s, negotiations are under way to establish new minimum wages and standard working conditions for certain sectors and professions.

Fortunately, more and more shareholders now seem to be of the opinion that negotiating with workers about job stability, welfare, and training programs can be beneficial to long-term productivity and profit – a move away from a decades-old relationship to the workforce as just another an expense that needs to be minimized for quarterly profits and management bonuses by the end of the year. Through a certain level of co-management, in which all parties have a stake in defining and working towards mutually beneficial long-term goals, unions can take on greater responsibility for the overall trajectory of companies and industries.

However, one problem is that governments are sometimes more shortsighted than company leaders. For example, a right-wing Indian prime minister Narendra Modi, used the pandemic as an excuse to push through laws that infringe on the rights and safety of workers. Supported by shortsighted corporate interests and their supporters in the financial media, his government is pushing the economy towards greater class distrust, industrial unrest, and stagnant productivity.

These trends have already manifested themselves in recent incidents such as the violent defeat at the Wistron assembly plant near Bangalore, which employs about 2,000 permanent workers, non-union members, and 7,000 contract soldiers. Dissatisfactionthat inflamed many workers were non-payment or delayed wages, extended working hours to 12 hours without prior notice and without consultation, and inadequate safety measures for women working the night shift.

One of the long-standing reasons for the fragmentation of the workforce in India has been the takeover of labor organizations by national political parties, whose leaders are often more concerned with mobilizing electoral support for their own political goals than with the day-to-day problems in the workplace. Fortunately, in recent years, independent movements have emerged, such as the New Trade Union Initiative, ready to challenge this political dominance.

But, nevertheless, in many countries, labor organizations are cornered. To rebuild a lasting position, they need to join broader social movements for human rights. This is the only way that unions in the United States, for example, can overcome many of today’s restrictions on collective action. Progress will be slow until there is enough public support for unions and enough public accountability for corporate employers to prevent giants like Amazon from blocking or discouraging labor organizations with impunity.

Pranab Bardhan, professor at the University of California at Berkeley