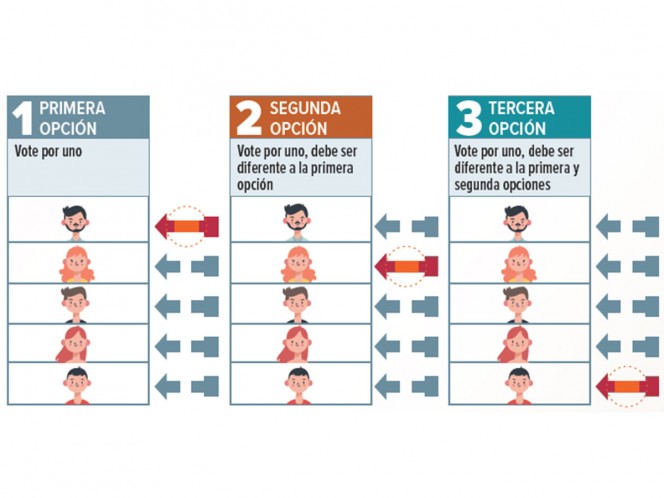 An electoral reform that took root in two iconoclastic states, Maine and Alaska, is gaining momentum across the United States.

It is about “voting in order of preference”, a concept that has been discussed for decades and is now being promoted in other states after a successful experience in Alaska.

There are already concrete proposals in Wisconsin. A new Virginia law allows cities and towns to use that mode starting this year. The Utah legislature just passed similar legislation, which is awaiting the governor’s signature. And in New York, this method is being used for the first time to elect the successor to Mayor Bill de Blasio, who can no longer run by law.

The modality could get a big boost if voting rights legislation passed in the House of Representatives survives Senate scrutiny, where it runs into opposition from Republicans.

Democratic Rep. Don Beyer has been promoting the modality for five years. He says that one of the main obstacles is the lack of information.

Basically, instead of voting for one candidate, the voter selects all the candidates for public office, sorting them according to their preference. If a candidate gets half plus one of the first places, he wins the election. Otherwise, the last-finisher is eliminated and the votes received are assigned to the second on that ballot. The process is repeated until someone draws half plus one.

The Maine electorate approved this modality in the races for federal offices in a referendum held in 2016. It was used in a presidential election for the first time in 2020.

See Also:  The love of Khabarovsk Beauty and the Beast got into the frame

In the current system, voters are reluctant to vote for a third candidate, other than the Republican or Democratic Party, because they think it is a lost vote. In the order of preference voting system, if your first selection finishes last, your vote will go to the second

The main opposition to this system comes from the two traditional parties, according to Jeremy Mayer, a professor of political science at George Mason University, who studied the issue.

It weakens them as sources of power, ” he said.

At least in Virginia, however, Republicans seem in favor of using that idea in party primaries. Republican leaders have been discussing for months how to select the candidate for governor and there is much emphasis on the system of voting by order of preference.

Mayer said the reforms promote civility because candidates are not going to want to alienate voters who may place them as second choice.

They also oppose the concept of sectors, which can manipulate party primaries, according to Katherine Gehl, founder of the Institute for Political Innovation. That organization calls for reforms similar to those adopted in Alaska, although it recommends a system with five finalists, not four.

The main benefit of voting in order of preference is not necessarily a change in the winner of the election, but the freedom it gives the victors to act beyond their immediate political interests, according to Gehl.

Rob Richie, president and CEO of FairVote, who has been promoting ranked voting for 30 years, said that technological advances remove some of the obstacles that existed in the past. “The logistics are easier,” he said.