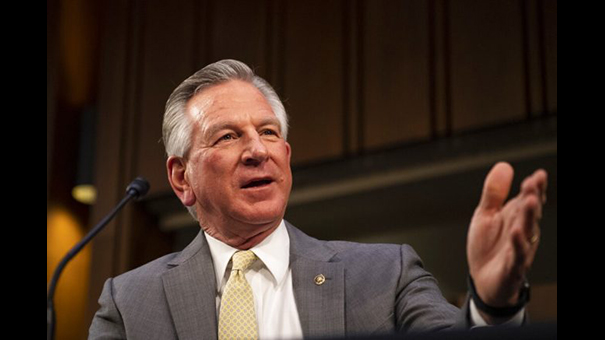 [VoiceofHopeJune92021](Compiled by our reporter Zhong Xuan)Senator Tommy Tuberville of Alabama recently introduced a new bill that prohibits the United States from investing the government’s Thrift Savings Plan (TSP) funds in any entity based in China. He said that China is the “biggest adversary” of the United States and that it is “doing everything possible to bypass standards and regulations.” Therefore, the United States cannot invest in it.

Taberville is a newly elected senator. He told the English “Epoch Times” on Wednesday (June 9): “We don’t want to strengthen its (CCP) military or business. The TSP is the government’s main retirement fund, with 6 million federal civilian employees and military personnel in it.”

He also said, “Basically, we will not allow this $700 billion to be invested in Chinese companies, because first, you can’t control it-it doesn’t abide by the rules, and it does everything possible to bypass standards and regulations. And our (investment) will strengthen its military power.”

Taking a hard line towards China is one of the few in the U.S. Congress that the two parties have in common. The US Congress is currently controlled by Biden’s fellow Democrats with a narrow advantage. The Senate passed 68-32 votes on Tuesday (June 8) to approve a comprehensive counter-attack legislation aimed at improving the US’s technological competitiveness against the CCP. In addition, the Biden administration also stated on the same day that it will use a new force to crack down on the CCP’s unfair trade practices and strengthen the United States’ own supply chain.

The US Department of Commerce is also considering activating Section 232 to investigate the impact of imported neodymium magnets used in motors and other industrial applications on national security. The neodymium magnets in the United States are mainly obtained from China. Although the Department of Commerce did not explicitly target China, the review is part of a broader strategy for the Biden administration to strengthen the competitiveness of the United States in the face of challenges posed by China, the world’s second largest economy.

U.S. congressmen call for: Dealing with the CCP must link trade with human rights

Expert: The U.S. should strengthen scrutiny of investment in China and export of new technologies

USCC: Increased review of investment in Chinese companies and funds