In June, the Surgut Theater closes the creative season. On the eve of the departure of the troupe on vacation, the director of the theater Svetlana Astrakhantseva shared with siapress.ru readers what to expect from the theater next season. And representatives of the creative team told how the theater lives today.

“Let’s just without the ‘confrontation theme’. In our theater now, nobody really cares about it – well, or almost nobody. In these two months, a full-fledged creative process has already started in the theater, the atmosphere of, I would say, creation has been revived. And speaking of problems, we are much more worried about the threat of tightening restrictions on attendance. Covid is coming again “, – meets us Andrey Kuleshov, Deputy Director of Public Relations and Marketing.

We go through the empty theater. Morning. Light, clean, echoing. Part of the troupe, it turns out, is already on vacation. Those artists who work with school camps remained. But active work will resume here in August.

The director’s office has changed markedly. Dolls were removed from the walls (there were about a hundred of them), books and an icon case disappeared from the shelves. And … nothing new in the design. Why?..

“Where do we start our conversation?
– Svetlana Astrakhantseva welcomes us. – Let’s take priority? The priority for the theater and the audience is now one. This is an expansion of the repertoire. They wrote about this on your portal more than once … I think, and my colleagues support me in this matter, it’s time to leave from a narrowly focused repertoire. Introduce variety – both in terms of form (staging performances of large and small forms, including performances solved by means of modern choreography, musicals, inclusive performances), and in terms of the choice of material – foreign and Russian classics, modern drama. Moreover, both our and invited directors will stage it.

From a conversation with Svetlana Vasilievna, it became clear what performances they are currently working on in the theater. As part of the New Year’s 2022 campaign, it is planned to cooperate with the Granitova-Auerbach tandem to create a musical fairy tale. Ekaterina Granitova — director, playwright, acting Dean of the directing department of GITIS. Her assets include staging performances at the Theater on Malaya Bronnaya, the Et Cetera Theater, the Russian Academic Youth Theater, the Theater. Mayakovsky and others. Grigory Auerbach – Composer, member of the Union of Composers of Russia, professor, teacher of the variety and directing faculties of GITIS.

Also, the theater is preparing a major restoration of the play “The Humiliated and the Insulted” based on the novel of the same name F.M. Dostoevsky. At one time, this performance was staged by the director Harold Shooters, and avid theatergoers remember him as one of the brightest in the Surgut theater. In addition, an inclusive performance is being prepared as part of the Accessible Environment federal state program. People with disabilities who have undergone training with specialists from various theater services will participate in the performance along with professional actors.

… We are walking around the theater again, now in the company of Svetlana Vasilievna. “Good morning!”, “Enjoy your coffee!” – Astrakhantseva enters the offices of economists, households, looks to the technical services and wishes everyone a good day. They answer her with jokes, smiles. This is similar to what is called a great microclimate in the collective.

“Maybe you remember that the theater owes its audience one more premiere, – Svetlana Astrakhantseva continues the conversation about the repertoire. – This event of a federal scale is the premiere of the play “Treachery and Love” based on the play of the same name by Schiller. Producer – Antje Weber, professor, head of the acting course of the Berlin Academy of Theater Arts “Ernst Busch”, production designer – Martin Fisher, one of the most famous and sought-after theater artists in Germany. The production began to be prepared even at Tamara Lychkata (the first director of the Surgut theater – ed.), but due to the pandemic, the project was frozen. We recently contacted Ms. Weber by phone and I convinced her to complete the video link. So, if everything goes in our favor, we will present “Treachery and Love” this year! In Ugra, they have not set it this way yet: to start work at a hospital, to finish it online.
Moreover, with the participation of highly qualified specialists in the field of theatrical art from Europe. “

I am introduced to the leading choreographer of the theater, an actress Alena Dudnikova… For two weekends in a row, the theater has had a standing ovation – the play “Blizzard” based on the story Pushkin, in which she worked on the plastic component. Alena has been serving in the Surgut theater for 12 years. She is also part of the very “Astrakhantseva’s team”, which is now actively transforming the theater.

“The theater has impressive plans! Personally, I am perhaps most inspired by the play based on the works of William Shakespeare. Recently, the director of this performance came to meet us Sergey Tonyshev… He is a graduate of the directing department of GITIS (course Sergey Zhenovach). I had my first meetings with the actors in order to assign roles. The premiere is scheduled for November. Another interesting thing is a performance in which through the language of modern choreography and the poetry of hokku, the theater artists, together with the audience, will explore Eastern culture, ” – shared Alena Dudnikova.

Enters the conversation Alexander Fokeev, actor, director, head of the youth studio of the Surgut theater – and director of the very “Blizzard”, which the theater successfully closes the season.

After the premiere of the play “Snowstorm”: actors of the theater’s youth studio and (in the first row from right to left) choreographer Alena Dudnikova, director Alexander Fokeev, lighting designer Alexander Lychkaty

“Working with actors, you understand that, perhaps, the most a problematic area of ​​theatrical activity in Ugra is the formation of a professional troupe itself. There are no creative universities here. In such conditions, a talented actor is worth its weight in gold. Both I and my colleagues are already seeing positive changes in personnel policy in our theater. And then there will be more – in August we are preparing to conduct a competitive selection of ballet dancers to work on choreographic projects ”, – says Alexander Fokeev.

According to him, now experienced talented actors are returning to the theater troupe – graduates of GITIS and the Chelyabinsk Academy of Culture and Art, who formed the basis of the acting troupe of the Surgut theater in the era of its heyday. 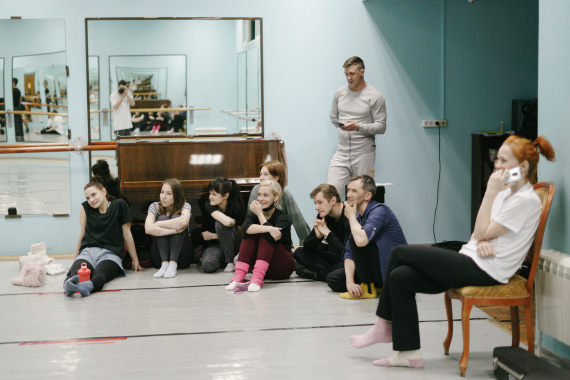 Andrei Kuleshov, who is in charge of promoting the theater in the Astrakhantseva team, draws attention to another factor of the “reset” of the IMDT: “It is already clear to everyone that the external attractiveness of the theater and its style cannot be underestimated. Ideally I want to bring to mind the building of the theater – to create a new image of it, declare it as an art object, perhaps in collaboration with some creative structure of artists in the district. Well, the work that is already being actively carried out now is a general update of the visual image of the theater: creation of a modern website with the introduction of a convenient form of online ticket purchase, development of a new logo and corporate identity for the theater.

Andrey Kuleshov also oversees the implementation of online projects of the Surgut Theater. One of them is the video and audio travel podcast “Theater in the North. Stories ”dedicated to the development of professional theaters in our district.

“We will also launch an innovative digital project, which has no analogues in any theater in Ugra. This is a reality show about the creation of a play by director Sergei Tonyshev. The reality show will tell the viewer about all the stages of work: from the stage of the director’s acquaintance with the theater and the choice of material to the premiere of the performance in the theater “, – explained our interlocutor. 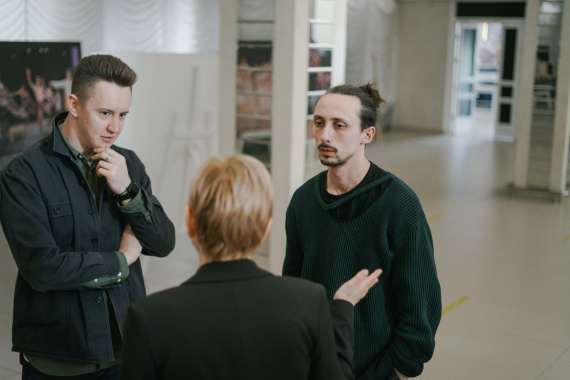 … The theater has a lot of plans, as we can see. We will follow the implementation! In the meantime, our tour of the theater comes to an end. I am again in the director’s office of Svetlana Astrakhantseva. In parting she says: “At the beginning of the meeting you noticed that I didn’t bring anything new into the director’s office, I just removed the old one. I will try to explain why. You know, there is such a state before dawn – twilight. It seems that the night has already passed, but the dawn has not yet come. And the way I feel myself now in the Surgut theater is akin to the feeling of these twilight. You know that dawn is ahead, where interesting, cool events await you. This dawn must be stepped out of this darkness. But this step – it must be very verified. You must believe in yourself, you must “grope” for the people you trust. And you don’t have to show all your cards at once. This is my mood. And according to him, I do not feel the need to hastily fill this office with chaos, something accidental. Let it be gradual.

So far, I have only these two certificates, which the theater received for participating in the White Space festival in the first month of my work here. They are very dear to me. And they are very symbolic. When I took office, the theater was for me a kind of white space, which now, every day, begins to play with different colors and gradually, I am sure, will become a truly bright and creative space. “