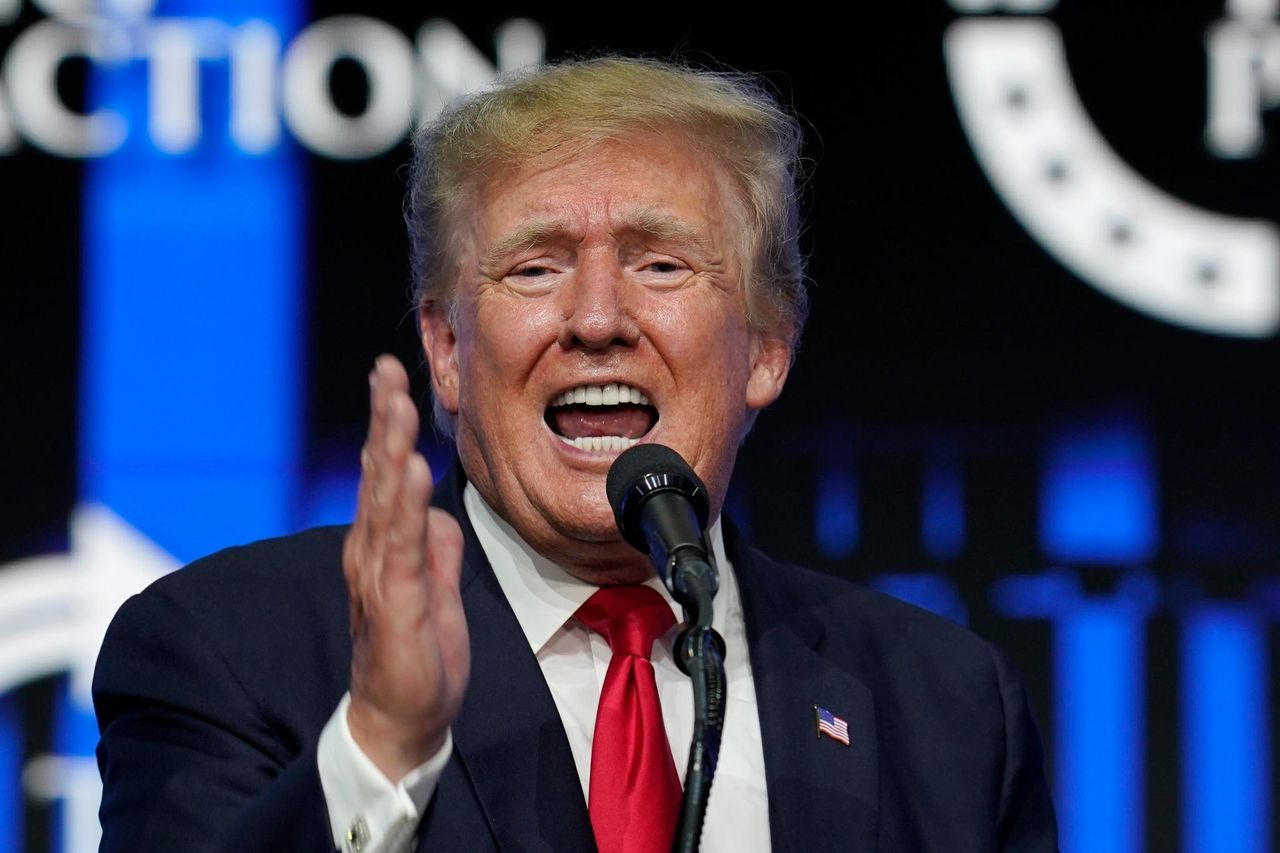 Former President Donald Trump moved his “Big Lie” tour to Arizona to Saturday afternoon, with a fascist speech to a crowd of 5,000 at the Arizona Federal Theater in downtown Phoenix. The event was titled “Protect Our Elections Rally,” an Orwellian twist to a speech in which Trump spent most of an hour and three quarters denouncing the 2020 election. and seek to overthrow it.

The appearance – the most recent in a series of such events over the summer – was notable for its escalation of the former president’s anti-Communist hysteria. At least half a dozen times Trump has called the Democratic Party and President Joe Biden – right-wing representatives of Wall Street and US imperialism – “communists.”

“The radical left-wing Democratic Communist Party rigged and sold the election,” he said. On immigration: “the socialist democrats and the communists are trying to include amnesty in their reconciliation”. On the media: “We are beyond socialism. When you don’t have a press to turn to, that’s how a communist country begins. They have no press. ” On the future course of development: “What is happening to our country has unfortunately happened to so many others. We are at the start of a communist system. The radicals are taking power and destroying everything that is dear to us as Americans, and it is happening. ”

One passage is worth quoting at length, as it provides insight into the type of appeal Trump is making and the type of political movement he seeks to build:

“We know in our veins that our American heritage has been passed down to us by generations of patriots who gave all they had – their sweat, their blood and even their lives to make America the most powerful nation in the world. the history of the world. And we are not going to let a small group of maniacs of the radical left and of Marxism take it away from us ”.

See Also:  They arrest an alleged drug trafficker in Sonora and is deported - Noticieros Televisa

Such language is not simply spewing out the worst kind of anti-Communist persecution, reminiscent of McCarthy’s witch-hunt of the 1950s. There is a new element here. Trump seeks to combine religious fundamentalism, patriotic flag waving, xenophobia, and anti-communism, with a complete hatred of democracy, elections, the free press, civil rights, and all forms of social equality.

This is the language of an American form of fascism, and Trump is campaigning, not just to regain power, but to build a fascist movement that would become the vehicle for him to establish a right-wing dictatorship in America.

For now, this effort is focused on transforming the Republican Party into its personal instrument. The gist of the one-day political rally was aimed at giving Republican candidates a boost in the 2022 election for governor, other state posts in Arizona, the US Senate, and the House of Representatives. Republicans deemed insufficiently loyal to Trump, including Governor Doug Ducey and State Attorney General Mark Brnovic, who confirmed the results of the 2020 vote, in which Biden narrowly won the state, were excluded from the rally and, in some cases, denounced.

He openly incites violence against his political opponents. His Phoenix rant was arguably even more inflammatory than the hour-long speech he gave to the crowd outside the White House on January 6, 2021, before directing the crowd to the Capitol, where it stormed in and blocked, for a time, congressional certification of Biden’s Electoral College victory.

While most of Trump’s speech was an even longer-than-usual repetition of past assertions about alleged incidents of voter fraud and ballot rigging in the 2020 election, it is clear that Trump sought to refute claims that his attack on the 2020 election was an attack on democracy.

See Also:  Armed men are detained in Mexicali, one is from Yuma | ELIMPARCIAL.COM

This tactic, like that of the “big lie”, is familiar to Hitler, who invariably sought to refute political attacks by claiming that his detractors were doing what he himself was plotting. So Trump, the man who was ousted from power by the biggest vote ever recorded in US history, presents himself as the savior of American democracy.

Trump has also told his supporters that as we prepare for the next election in 2022, “We don’t have the luxury of sitting down and waiting for the next election. We don’t have it. ” He urged support for the effort sponsored by the Republican-dominated Arizona Senate to conduct a so-called “forensic audit” of votes cast in Maricopa County, the county that includes Phoenix, and where the two live. third of the population of Arizona.

The Republican-led Maricopa County Board of Directors and Republican Governor Ducey opposed the audit and were repeatedly denounced in local media as an amateurish operation that has already gone on for four months without No result. Last week, the former Arizona secretary of state, who served as the “director” of the audit, was denied access to the premises by Republican officials because he released figures who questioned their allegations of electoral fraud.

Trump praised the audit and said he inspired similar efforts in Michigan, Pennsylvania, Georgia and Texas, where the Republican-led state legislature is set to approve an audit limited to large urban districts, of which 10 out of 13 voted for Biden last year.

The former president also used his platform to attack Republican Senate Leader Mitch McConnell and his own former Vice President Mike Pence as well as the handful of other Republicans in Congress who held him accountable of the attack on Congress on January 6.

It was remarkable, however, that Trump avoided the subject of the attempted coup altogether. He made no reference to the House of Representatives special committee hearings, which are due to start on Tuesday, on the January 6 attack. He also didn’t mention Republican House Leader Kevin McCarthy, who sought to sabotage the commission by appointing die-hard Trump supporters, like Rep. Jim Jordan, who were ultimately blocked by the commission. Speaker of the House of Representatives, Nancy Pelosi.

He also did not mention Ashli ​​Babbitt, the Trump supporter from Arizona who was shot on Jan.6 by a Capitol Hill police officer while leading a group of police officers. rioters trying to enter the House of Representatives and attack members of Congress there.

This omission was all the more noticeable as Babbitt’s mother was present at the rally as a guest of Representative Paul Gosar, an ultra-conservative Republican and staunch advocate of police violence in other circumstances, who called Babbitt’s death a ‘”execution”. Gosar shone the spotlight on his guest, but Trump did not refer to Babbitt, having portrayed her as a martyr at previous gatherings.