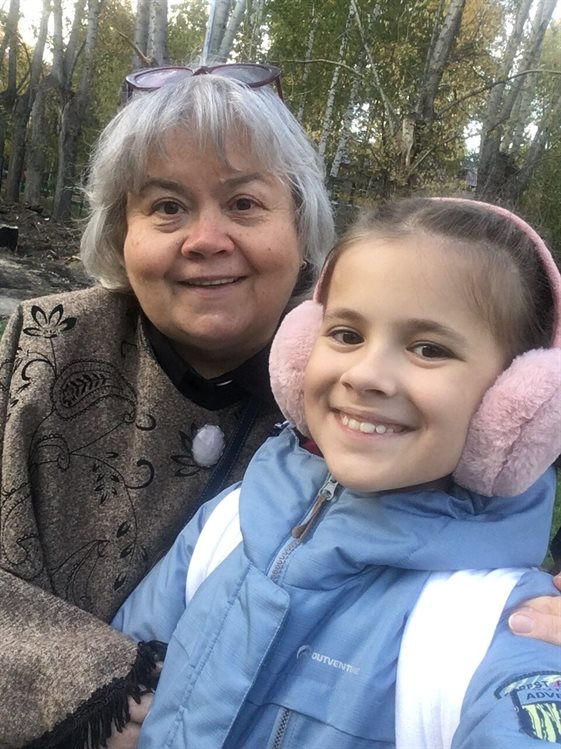 A resident of the village of Maina Tamara Istomina anxiously keeps a letter from Tyumen sent to her by her daughter Lyubov Zemskova. The envelope contains three sheets of printed text.

One is an essay by Tamara Ivanovna’s great-granddaughter Polina Zemskova about her great-great-grandfather Ivan Fedorovich Nuzhdin. Many people of the older generation remember him in Main of the Ulyanovsk region. The second is information about combat general Mikhail Rostomashvili. The third is a short story about the warrior of the Great Patriotic War Vasily Delnov from Penza. What unites these three people – the driver, the car mechanic and the general?

– My grandfather, Ivan Fedorovich Nuzhdin, – Lyubov Ivanovna Zemskova told our correspondent, – during the war he was a driver. He drove General Rostomashvili, the head of the counterintelligence department Smersh. And the grandfather’s assistant was Vasily Delnov. Ivan Fedorovich, of course, told us something about the war. But not as much as we would like. And then, when the Internet appeared, I started looking for information about him, about the general, about Delnov. It was possible to find something about grandfather and Vasily Vasilyevich, but at first there was no information about Rostomashvili. Maybe because he was a counterintelligence officer. But then this information appeared, and I managed to contact the general’s granddaughter – Leila Vilenovna Chistyakova-Rostomashvili. She sent information about Mikhail Yenukovich. I wrote down everything I remembered about Delnov. By the way, he came to Maina to visit his grandfather. I remember being surprised – such a big man, but crying when he remembers the war. I told my granddaughter Polina about all this. And she became so interested that she wrote an essay about her great-great-grandfather.

In the ranks of the “Immortal Regiment”

11-year-old Polina does not know what war is. Her mom and dad didn’t see the war either. Even her grandparents were born and raised in a peaceful country. Perhaps she would have known about it only from textbooks and films … But the Zemskov family cherishes the memory of those who fought, who fought for Victory at the front and in the rear. Polina dedicated a school essay to the memory of her great-great-grandfather:

“My great-great-grandfather is Ivan Fedorovich Nuzhdin. Grandfather fought on the Kalinin, Stalingrad, 4th Ukrainian and 1st Baltic fronts. He was drafted to the front in July 1942 and enlisted in a separate Smersh counterintelligence company of the Second Guards Army. Before the war, my grandfather was a very good driver. This skill came in handy at the front. After the liberation of Stalingrad, the head of the counterintelligence department Smersh, General Rostomashvili, offered him a new place of service – a personal driver. In grandfather’s notes there is an answer to the general: “I am a soldier, I am called to defend the Motherland. Wherever you order, I will work there ”… My grandfather went through the war until the Victory, was wounded. Among his awards are medals “For Military Merit”, “For the Defense of Stalingrad”, “For the Capture of Konigsberg”, “For Victory over Germany” and the Order of the Red Star, they are carefully kept by one of his grandfather’s grandchildren, who became a soldier.

They say that my grandfather was an accordion player and a wonderful storyteller. But he was reluctant to talk about his exploits. Relatives learned a lot from the military archives and from the letters of General Rostomashvili – my grandfather was friends with him for a long time and after the war.

Grandfather died when my dad was the same age as I am now (the essay was written when the girl was 9 years old. – Author). He left in May, shortly after the May holidays … Probably because Victory Day is not only a joyful holiday, but also a very sad day of remembrance, a day of memories of terrible and bitter losses. The hearts of old soldiers often cannot bear these experiences. On the day of the 70th anniversary of the Victory, when I was very little, my dad and I carried a portrait of Ivan Fedorovich Nuzhdin’s grandfather in the ranks of the Immortal Regiment in Moscow on Red Square. I remember. I’m proud!”

Lyubov Ivanovna said that her granddaughter recently made her family and friends very happy.

“Polina became the champion of Russia in sport dancing,” says Lyubov Zemskova, not without pride. – For the sake of such peaceful
victories, our grandfathers waged a fierce war with the enemy.

From the presentation to the Order of the Red Star by Ivan Nuzhdin.

“In February, m-tse of this year, having left for the fulfillment of a special assignment of the leadership in the II Guards. SKK, comrade Nuzhdin came under enemy shelling, where two cylinders of the car were damaged. Despite this, his bold actions were completed on time. In the region of Goldava, he was directly involved in a task force to capture saboteurs. With his bold actions, he rendered great help to the group, which caught 6 people. saboteurs “.

Saved by a green star

Well, what about the general? He died in 1987, he died in Tbilisi. Elena Chistyakova-Rostomashvili, when Lyubov Zemskova found her on the Internet, shared information about her grandfather.

“Mikhail Yenukovich Rostomashvili in 1941, when the war began, served in Kharkov with the rank of major general in the position of chief of a special department of the army. In the war he became the head of the counterintelligence department Smersh (“death to spies”). Front roads passed from Moscow to Germany. For his courage and bravery he received many awards: the Order of the Red Star, the Order of the Patriotic War, the Order of Lenin, and four Orders of the Red Banner of Battle. Medals “For the capture of Konigsberg”, “For the defense of the Caucasus”. Memoirs of grandfather: “In 1945, in the rear of our troops, eliminating bands of fascists, we took an enemy bunker. The captured fascists were taken out of the bunker and built in the clearing. I gave instructions on what to do with the captured weapon. My adjutant came up to me and, raising his hand to the visor of his cap, said in a loud voice: “Comrade Major General! The car is ready to ship! ” One of the German soldiers looked at me in surprise and asked in broken Russian: “General? If I knew that you were a general, I would have blown you up along with the stump. ” The fact is that the grandfather was in field uniform, the stars on his shoulder straps were green, they merged with the uniform and were not visible to the enemy. And the stump on which he was sitting turned out to be mined. This is how the green star saved the life of not only grandfather, but also many of the military who were next to him. “

The choice in favor of a seasoned ace

“The grandfather was always surprised,” recalls the grandson of Ivan Nuzhdin, Sergei Istomin, “how did we survive ?! He told me: in the forest or in the field, we will stop for a snack or for other reasons. As soon as we drive away, a bomb or a projectile arrives at this place.

Both Sergei Ivanovich and Lyubov Ivanovna remember the visits to Maina by Vasily Delnov from Penza. Here is what Lyubov Zemskova writes about him, according to the stories of Ivan Nuzhdin’s grandfather:

From the frontline characteristics of Vasily Delnov:

“Comrade. Delnov at the front … showed himself to be a brave and brave warrior. Machine comrade. Delnova covered 90 thousand kilometers without major repairs. He saved over 200 kg of gasoline. In August of this year. Comrade Delnov three times, falling under the bombing of the enemy with the task force, fulfilling the assignments of the command, assisted in the detention of the enemy element. ” “General Rostomashvili ordered his grandfather to choose a soldier to help him with technical support. Grandfather could have picked up an experienced and seasoned ace for this business. But he chose a tall, stately, but very young boy from Penza. He was 19 years old, my grandfather – 29. Together they reached the Victory, both were awarded orders and medals. And then they were friends all their lives. Vasily Vasilyevich Delnov was grateful to Ivan Fedorovich for his life. After all, the choice was made on the eve of the offensive. In those battles, many of their fellow soldiers were killed, and Vasily survived. And he remembered to whom he owed his life. “