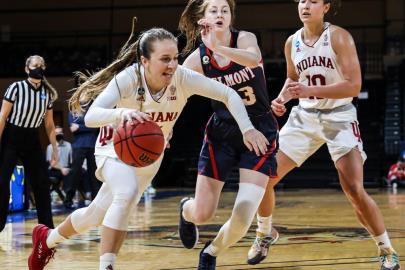 Nicole Cardaño’s Indiana Hoosiers and Helena Pueyo and Marta García’s Arizona Wildcats will meet in the quarterfinals of the fight for the NCAA title, ensuring a Spanish presence in the Final Four for the second time in history.

The quarterfinals of the fight for the NCAA title come with a Spanish confrontation between the Indiana Hoosiers of Nicole Cardaño and the Arizona Wildcats of Helena Pueyo and Marta García. This crossing will allow for the second time in history to have a Spanish presence in the Final Four of the university league.

In 2019 the now base of the Perfumerías Avenida de Liga Femenina Endesa, Maite Cazorla, became the first national player to play the prestigious tournament. Last year, due to the health crisis, the title was deserted, and therefore, for the second consecutive edition, there will be a Spanish color among the four best.

Nicole Cardaño’s performance was key for the Hoosiers to advance to this ‘Elite 8’. The base is fixed in the starting five and his 14 points, 2 assists and 3 rebounds were vital for the victory over NC State (73-70). The end of the clash was adjusted and the player, who is in her fourth year of college, did not miss from the free throw line at a crucial moment in the clash (72-68 with 21 seconds remaining in the fourth quarter).

The Pueyo and Garcia Wildcats more comfortably beat Texas A&M (74-59). The Mallorcan forward was on the court for 24 minutes and contributed 5 goals, 1 rebound, 2 steals and 1 block. His partner Marta García has not gone on the court so far this tournament but is in the San Antonio bubble enjoying the experience.
For their part, the centers Nerea Hermosa and Aixa Wone, who are active in Georgia Tech, could not pass the round when they fell to South Carolina (65-76). Hermosa scored 2 points and grabbed 5 rebounds.

This ‘March Madness’ has been one of the editions with the largest Spanish participation in history. In addition, of the five who accessed the ‘Sweet 16’ only Cardaño is senior. The rest of the players have two or three seasons left to try to repeat the feat.