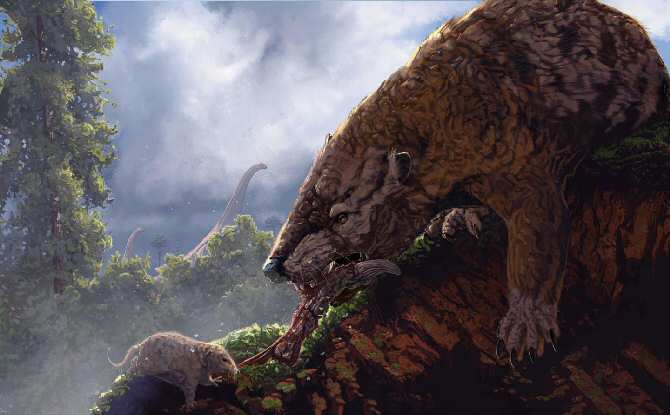 New research suggests that, in the days of dinosaurs, the main enemies of today’s mammalian ancestors were not dinosaurs as has been traditionally believed.

The team that conducted the study, which includes Elsa Panciroli, from Oxford University, and Gemma Benevento, from Birmingham, both institutions in the United Kingdom, have concluded that it was not the dinosaurs, but quite possibly other mammals, the main competitors to the ancestors of modern mammals before and after the mass extinction of the dinosaurs.

Most of today’s mammalian species originate from groups that exploded 66 million years ago, when a mass extinction wiped out all non-avian dinosaurs. It was traditionally thought that, before extinction, mammals lived in the shadow of dinosaurs. It is assumed that the presence of the dinosaurs prevented them from occupying the niches that those beasts already occupied, which made the mammals relatively small and not specialized in terms of diet and lifestyle. For this reason, it has been taken for granted that non-avian dinosaurs were the ones that prevented them from thriving. And that they only prospered when the disappearance of the dinosaurs left those niches vacant.

In the new study, statistical methods were used to analyze the degree of limitation of the different groups of mammals in their evolution before and after the mass extinction that wiped out the dinosaurs and other life forms. These statistical methods allowed Panciroli and Benevento’s team to identify the point at which evolution stopped producing new traits and began to produce traits that had already evolved independently in other lineages. This allowed the researchers to identify the evolutionary “limits” imposed on different groups of mammals, showing where they were excluded from different niches by competition with other animals. The results suggest that it was not the dinosaurs that kept the ancestors of current mammals cornered during that time, but other mammals, specifically the closest evolutionary relatives of the ancestors of current mammals.

Animals of the earliest mammalian lineages, like this great Mongolian Gobiconodon, cornered the ancestors of modern mammals in the time of the dinosaurs. (Image: Corbin Rainbolt).

The study analyzed the anatomy of all types of mammals that lived with dinosaurs, including the ancestors of modern groups. By measuring how often new traits appeared, such as changes in the size and shape of their teeth and bones, and the pattern and timing of their appearance before and after the mass extinction, the researchers determined that the mammals from which they The modern descendants were more limited during the time of the dinosaurs than their close evolutionary relatives. This means that while, in their evolution, their relatives explored larger body sizes, different diets and novel ways of life, such as climbing and planning future actions, the ancestors of modern mammals were marginalized, with no greater prospects than those of continuing to possess bodies. small and have general habits.

The study is titled “Mammaliaform extinctions as a driver of the morphological radiation of Cenozoic mammals.” And it has been published in the academic journal Current Biology. (Fountain: NCYT de Amazings)