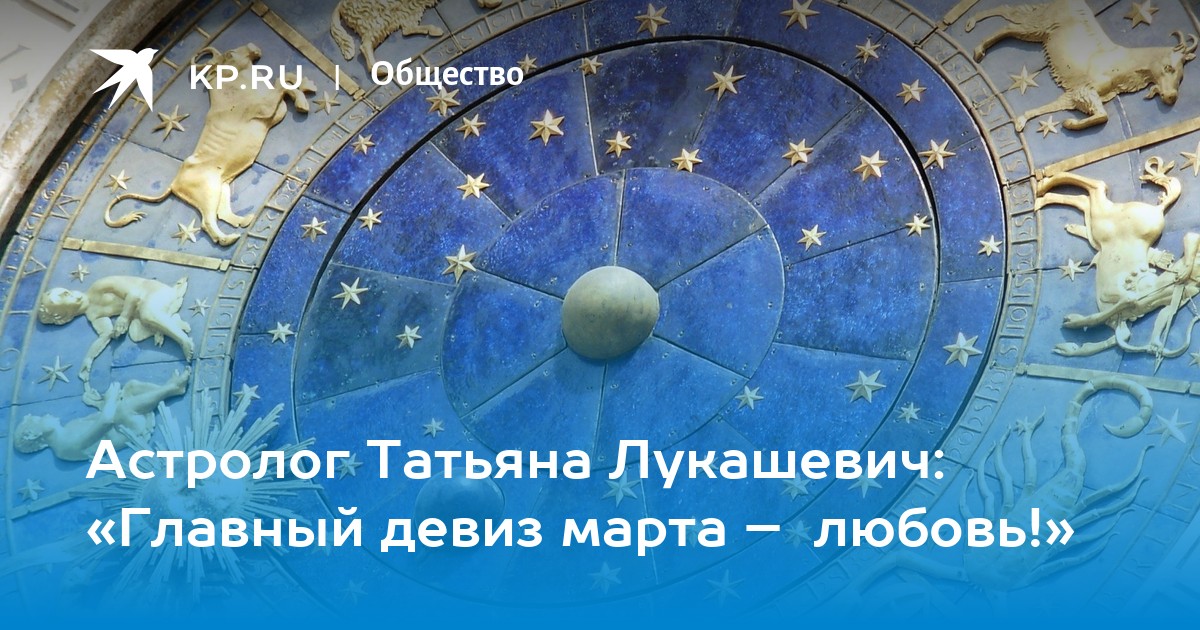 The astrologer tells what awaits us in March.

– Tatyana, actually, let me remind you, according to the calendar spring begins, the time of love. So it was from century to century. How does this March differ from the previous ones, explain.

– All this March, Venus – the patroness of love – will rush at a speed of more than 100% of her usual speed, in parallel with the Sun. Moreover, if at the beginning of the month Venus is prone to romance and daydreaming, peacefully basking in the sun’s rays, then at the end of the month she will literally burn out from passion, jealousy and other violent sensual manifestations. And if someone suddenly had a secret romance hidden from prying eyes, in March it is almost impossible to hide it. Everything will be clear from your burning eyes! Especially around the full moon on March 28, which will occur in the sign of Libra, which is responsible for relationships.

And you yourself will not want to hide anything, since it will be almost impossible to keep the brain activity in the same state as in winter.

– Since March 15, Mercury has entered the sign of Pisces, where his logical abilities and sobriety of thinking are eroded by the energies of Neptune. It will be especially difficult for the signs of the air: Gemini, Libra, Aquarius and the sign of Virgo.

However, if everything is stable in your partnership, then look at your husband or wife with different eyes. Perhaps you should arrange a second honeymoon and revive your “settled” feelings? After all, first your partner becomes bad with you, and then good with others.

Venus is also responsible for copper, and the Sun for gold. For traders on the stock exchange: take a closer look at these metals, perhaps a powerful movement is brewing in them.

The second important cosmic background in March is the still-persisting tense aspect of Saturn and Uranus. He still keeps us from making drastic changes. Something needs to be thought over, refined, calculated, a foundation and an action plan must be created. Only then will the gates open for new steps. This applies to both personal life and events in society.

See Also:  In the USSR, people's lives were played at cards: details of the "case of the deaf and dumb"

– There is one more space background, Tatyana. Coronavirus. You are the only astrologer, analyst, or scientist to predict this attack at the beginning of December 2019. March 11 is the first anniversary of the announcement by the World Health Organization of the COVID-19 pandemic. At the end of that March, antiquarian restrictions began in Russia. President Vladimir Putin then addressed the nation, declaring non-working days from March 30 to April 5 to contain the coronavirus in the country. Then these “non-working days”, in fact, quarantine, were extended for the entire April, early May. Your optimistic astrological forecasts for January and February on the decrease in the incidence of COVID-19, published in Komsomolskaya Pravda, are confirmed. Our fall began with the new year. This has been a worldwide trend for several weeks now. However, a number of doctors are scared that with the onset of spring heat, a new outbreak of the virus will begin, even a third wave. And covid is a hindrance to love.

– Indeed, a hindrance. How many couples now cannot connect due to closed borders and are forced to communicate only via the Internet. However, I believe that the virus will gradually go away, and from the end of May the borders will also be opened. The trend towards easing covid events will continue throughout the summer. But since October, they can again partially return the masks and limit the presence of people in public places. But these measures will be more preventive than due to the real danger of a pandemic. But now, while the virus is still in the air, of course, it is worth taking care of yourself and your loved ones, as well as strengthening your immunity.

March 4: Mars passes into Gemini. People are prone to quick and decisive action, intellectual work, trade, mediation, advertising business will do well. But there may be difficulties in communicating with neighbors or relatives. Men will be energetic and full of strength. It is recommended to observe the speed limit when driving a car.

the 5th of March: exact conjunction of Mercury and Jupiter. Successful solution of legal issues, in paperwork, passing exams in a foreign language, an important acquaintance.

March, 6: fourth quarter of the moon, the square of the stars of the sun and moon. Tendency to conflict in the family.

March 7: favorable interaction of the Sun and the Moon. Harmonious family relationships.

Opposition of Mars and the Moon. Increased irascibility, irritability, you should be especially careful when driving any vehicle. It is not recommended to carry out planned operations. This recommendation does not apply to emergencies.

12 march: the square of Mars and the Moon. Increased vulnerability, irascibility, irritability, you should be especially careful when driving any vehicle. It is not recommended to carry out planned operations. This recommendation does not apply to emergencies.

March 13: new moon in Pisces. Intuition, daydreaming, desire for creative self-expression, compassion, romance, self-sacrifice are enhanced. A secret romance may begin, platonic love. There will be a desire to be alone or to escape from reality.

Avoid alcohol and untested medications – the risks of poisoning are high. People who are prone to mental illness are especially vulnerable.

March 15th: Mercury enters the sign of Pisces. Thinking becomes more intuitive, imaginative. This is a great time for creative people. However, at the same time, absent-mindedness, daydreaming, and inattention are increasing, which creates the likelihood of errors in paperwork. Also, people become more gullible, which makes them vulnerable to fraudulent activities.

20th of March: conjunction of Mars and the Moon. Increased irascibility, irritability, you should be especially careful when driving any vehicle. It is not recommended to carry out planned operations. This recommendation does not apply to emergencies.

The sun passes the star Sheat and enters the sign of Aries. Accidents can occur in hot water supply systems, accidents and injuries increase. Avoid all kinds of risky activities.

March 21-22: exact trine of Mars and Saturn. Promotes the promotion of cases in government agencies, as well as those related to real estate and construction.

1 quarter moon, square of the sun and moon. Tendency to conflict in the family.

March 24: harmonious interaction of the luminaries of the Sun and the Moon. Promotes stability in family relationships.

The square of Mars and Mercury. Difficulties on the road. Carefully drive any vehicle.

March 24-27: exact conjunction of the Sun and Venus. Egocentrism, passion, and the need for sensual pleasures increase. But creativity is also enhanced.

March 28: full moon in Libra. The topic of partnership and contractual relations comes to the fore, clarity and the first results of the cases laid down on the day of the new moon on March 13 appear. Day of public speeches, advertising campaigns, especially for people of show business.

On the physical plane, there is poor sleep, emotional excitement, a tendency to conflicts in the family.

March 29-30: Mercury passes the planet Neptune. Diffusion of attention and, as a result, the danger of falling under the influence of scammers. The number of deceptions is increasing. For creative people, this is a good time for inspiration, getting information through dreams or esoteric practices. Outdoor recreation near water is recommended.

EpiVacCorona vaccine: how it was tested and whether it will protect against new strains of coronavirus

Tatiana Nepomnyashchikh, Deputy Head of the Vector Research Center, told the details about the tests of the second Russian anticoid inoculation “KP” (details)