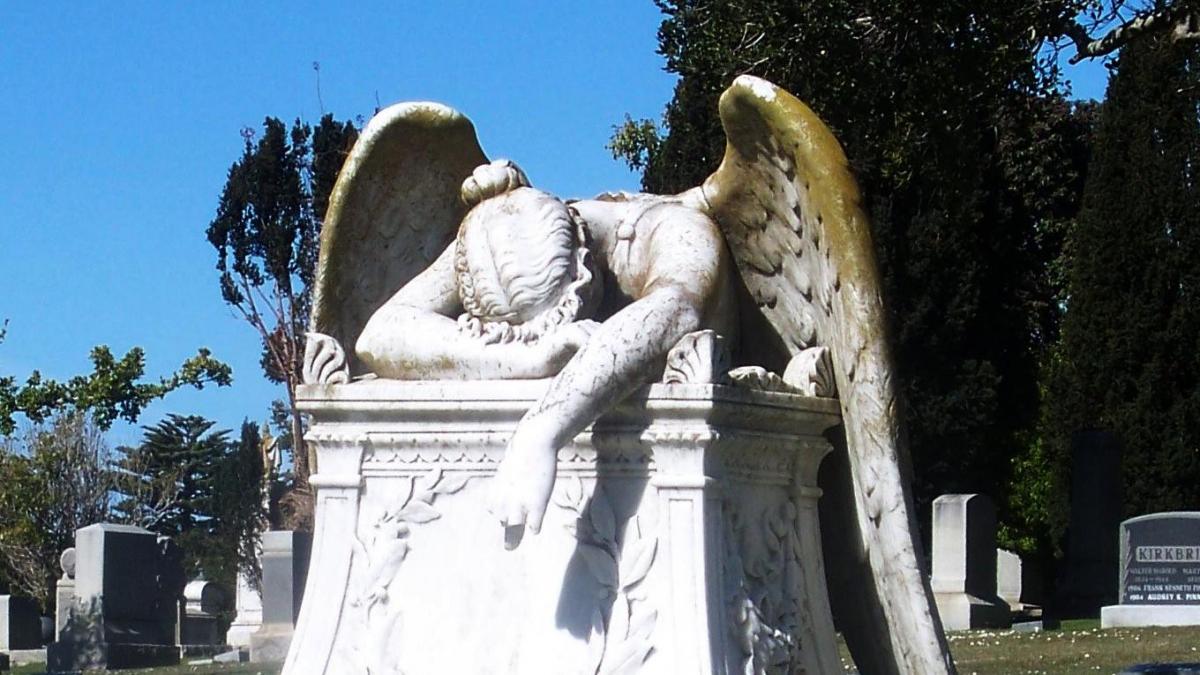 Cemetery tourism is not uncommon. Travelers who come to visit the grave of rocker Jim Morrison in the Père Lachaise cemetery in Paris; that of the philosopher Karl Marx in London’s Highgate; or that of the writer Hans Christian Andersen at the Assistens in Copenhagen. Or of characters who are not known but who have really impressive funeral sculptures like that of the marble manufacturer Josep Llaudet in Barcelona’s Poblenou, where many people are shocked by the unequivocal The kiss of the death.

It is not a minority tourism, you just have to take a walk on the internet and see the number of books dedicated to funeral tourism, no less than half a dozen in Spanish.

For those who like this type of trip, Colma is their city. It is at the end of the southern peninsula that closes the San Francisco Bay, in the United States. And it is a feast for visitors to cemetery, as they have no less than eighteen (seventeen dedicated to humans and one for pets). The census indicates that there are more than a million and a half bodies buried. And that those who live in the town (and here the verb is well used) are only 1,500 people. That is, the ratio is one thousand to one.

The designation of Colma as the preferred cemetery of San Francisco has its explanation in the period of the Gold Rush, which took place at the end of the 19th century in northern California and also in Alaska and Yukon (where the prospectors arrived precisely from San Francisco). The adventurers fell like flies, a consequence of all kinds of diseases, but also fights, assaults, accidents …


There came a time when the prosperous city of San Francisco could not dedicate more land to the deceased, so a provision from 1900 decreed that it was prohibited to bury more people in the city. This was reinforced with an order twelve years later, in which the coffins of those already buried were ordered to be transferred, to free square meters in a city where the price of land was skyrocketing.

The solution was found in Colma, only ten miles away through not very difficult terrain, through which carriages could pass. The result is that today this town is known as The City of Silence. There are cemeteries separated by religions (Jews, Catholics, Muslims, Greek Orthodox), but also by nationalities (Chinese, Italians, Serbs) and others that do not make distinctions.

Colma has a cemetery dedicated exclusively to clowns

Celebrity grave hunters have their chance here too. Legendary bailiffs like Wyatt Earp are buried in Colma – whose tombstone was stolen by some fetishist, who never appeared again -; Wonderful baseball players like Joe di Maggio; or the “inventor” of jeans, Levi Strauss.

The cemetery dedicated to pets is nothing extraordinary, many great cities in the world have it. However, Colma gives a twist to his “specialization”, and has a cemetery dedicated exclusively to clowns. It is a section of one of the largest cemeteries in the city, the Olivet Memorial Park, known as the Alley of the Clowns.


It is surprising that some tombstones are in the shape of a circus tent and that the characteristic faces of white-faced comedians are drawn on their surface. It was inaugurated in 1945 and gives rest to several dozen prominent members of the circus. There is a monument that acts as a “joint tombstone” on which dozens of names of these comedians have been engraved.

With such a dead population, Colma has a thriving funeral industry of florists, marble shops, funeral homes and circumspect rental cars. It goes without saying that it is a very quiet city, which only sees its calm broken on the days around Halloween, in the last days of October, when hundreds of onlookers from neighboring San Francisco go to Colma to enjoy of their costumes in the perfect environment.

Outside of these days, Colma is so pleasant that one of its best-selling souvenirs are T-shirts and mugs on which you can read the funny slogan “It’s great to be alive in Colma.”