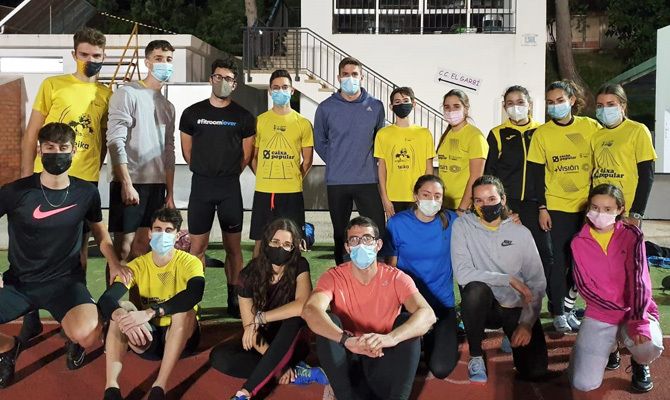 
The CA Safor Teika technification athletes received a very special visit in Gandia last Monday, that of the elite athlete Óscar Husillos, a specialist in 200 and 400 ml The sprinter, European indoor runner-up in the 400 ml in 2019, competed in the last Saturday at the City of Valencia International Grand Prix, winning the 300 ml test
Between Monday and Wednesday he is carrying out a ‘stage’ in Gandia, and on Thursday he is already leaving to compete on Friday at the international meeting in Karlsruhe (Germany). In addition, he is preparing the European to be held in Toruń (Poland) in March, where he is one of the favorites.
The man from Palencia is “famous” for his disqualification from the 2018 Birmingham World Cup for stepping on the adjoining street by a few millimeters, despite setting a 44 ”92 race that would have broken the European record. In Gandia he took advantage of the meeting with the Safor boys to give them some advice. Among the anecdotes, when some athletes asked Husillos to mediate with the coach, David Melo, to take away the last series, Husillos told them that the series, “once accepted, are not negotiated, they are done until the end” , with which he came to transmit values ​​such as perseverance and effort.
It should be remembered that the Toni Herreros athletics track is open only for the training of federated athletes who are preparing for their Spanish championships, in accordance with the new Consell restrictions to face the pandemic.