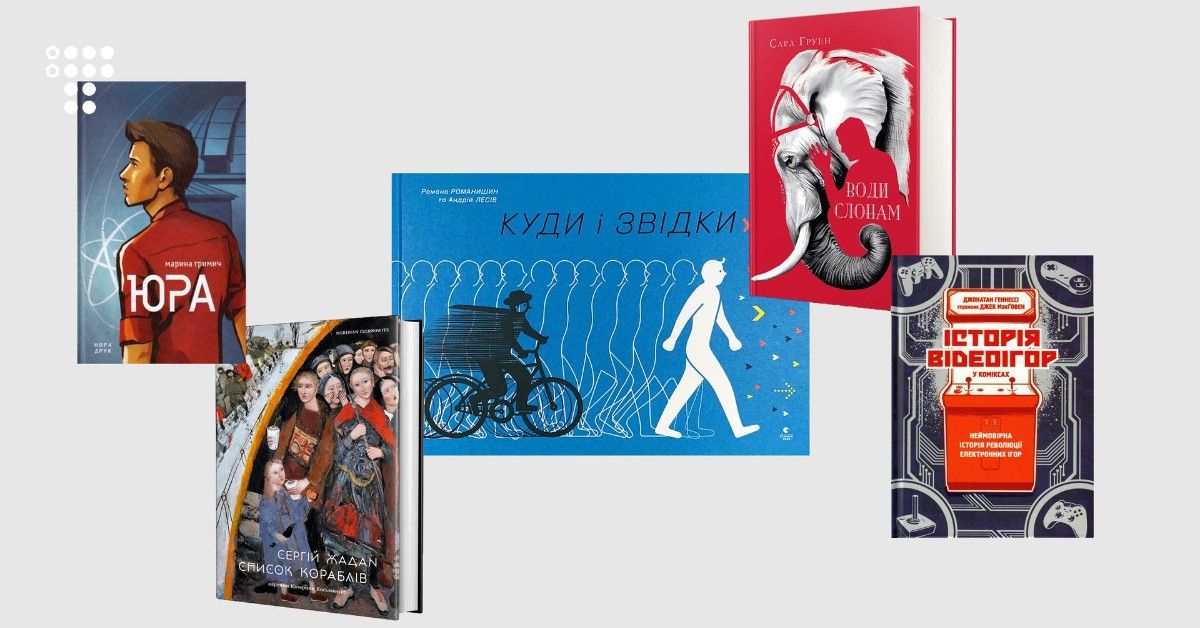 In the year of the pandemic, we especially lacked opportunities to gain new experiences. However, we are gradually adjusting. We travel thanks to travel programs, plunge into a foreign era with the help of a new fashionable series about the era of the Regency, watch theater and circus performances online, again play post-apocalyptic games without an inner shudder. This month – a fresh selection of books on travel, circus and immersion in foreign eras. And there are enough post-apocalyptic things on the winter streets.

Why it is important to read these books right now, says literary critic Bogdana Romantsova.

“Yura” is a continuation of Marina Grimich’s novel “Klavka”. The scenery is the same, but the time has changed. If in “Klavka” it was about the life, work and love of a Soviet typist in 1947, then in “Jura” the events unfold already in 1968. There is a thaw in the streets, and love is in the heart of Klavkin’s son Yura.

Yura is the son of a Soviet party official, a physicist during the confrontation between physicists and lyricists, an exemplary student, a Komsomol organizer who is promised a brilliant future. A guy who is very lucky to grow up in the right family in the right city. Yura’s mom is no longer a simple typist, but a venerable editor of the Molodist publishing house. She quietly promotes texts that are far from socialist realism, and can afford to laugh at the meetings at the spies sent by the system. But Klavka does not risk anything, because “do you know whose wife this is?” But Yura’s father with the speaking surname Baklanov is simply the embodiment of a system that has softened into a thaw, melted and lost its former aggressive agility.

The right guy, Yura, is friends with the same right young men and women, whose families are firmly connected with the KGB, the Central Committee and other significant abbreviations. Parents can afford a dinner at the restaurant “Ukraine” or “Metro”, as well as give their son some money so that he treats the girl with a specialty cake in the cafe “Prague”. Soviet golden youth are not angry and even a little protesting, as long as this does not threaten anything. Such will sing “The Beatles” with a guitar in the country and get drunk with cheap sparkling wine, but they are unlikely to go to throw off the criminal power.

However, the “musketeers”, as they call themselves, have to grow up quickly. The very critical time puts them before a series of elections, and each time it is about a choice between a specific person who broke the rules of the game and the Soviet system. We have to admit that the system can fail, which means that it is not enough to rely on its instructions as something ready. The rules of life must be formed by yourself. And even if you don’t go out into the streets of Prague under the tanks yourself, you can still make the right choice.

Irony of fate: Historically, the Musketeers worked for the system, their self-confidence is directly related to the confidence in the crown. At the same time, Grimich’s “musketeers” are losing the ability to unconditionally trust the authorities. Now they are their own authority. Reading about such transformations of heroes is always interesting.

Zhadan issued a new collection of poems to the mountains – and this is already a holiday. However, an even greater celebration is that this is really a new (!) Book of poems: with fresh intonations, unexpected rhythms, strong images.

Structurally, the collection is divided into two parts: a free-verse thirty for those who missed the poet’s early, non-rhymed experiments or simply wants to see Zhadan, different from the Templars. And the saving thirty – for those who are afraid of the unusual beginning and want to return to a rough combination of consonants and chopped rhythmics. Therefore, there is an option to choose the half of the ships that is closer to you.

This world is built according to the laws of analogy: speech reflects reality, however, reality also reflects language. Black footprints on the road – like letters, “untouchable dashes of snow.” But it works both ways: and the letters on the page are like black tracks on the road. There is no primary reality or copy here, because language is as real as nature. They become a touchstone for each other: only what is spoken in poetry is valid, only what is reflected in nature is true poetry.

The “List of Ships” is also an attempt to escape death, not only your own, but also someone else’s. Whose? But to find out, you have to read the entire list, down to the last line.

“In the beginning was the Word,” the world’s most famous book on creativity tells us. “No, there was light in the beginning,” argue the authors of A History of Video Games in Comics. Yes, video games don’t necessarily require a computer, but light and the ability to control it are critical.

Even if you know nothing about video games and have never been interested in them, the exploration of Hennessy and McGowen will be a fascinating journey for you into the past, where there was a place for the many inventions that prepared the world for the emergence of the first video game – from the steam engine of Corliss to the light beam that Great Britain was going to shoot down enemy aircraft during World War II. Step by step, an ambitious story of the creation of an alternative world on the screen unfolds before us – fascinating and brighter than our reality. Engineers, mechanics and artists have tried to convey their passion and passion to players around the world. And one day they succeeded.

It is said that the first video game was created by the English mathematician Alan Turing during World War II, while working to decipher the code of the German Enigma cipher machine – and it was about a chess simulation. However, Alan was not lucky enough to see a computer powerful enough to run the program.

But the first realized video game can be called “Electro-beam entertainment device”, where it was necessary, by rearranging the resistors, to hit the target with a point of light. Not impressive? However, it was this tiny dot on the screen that became the prototype for the well-known Angry Birds.

Every video game is a battle. With peace, a rival, in the end, with myself. This is a competition on an equal footing between the best – it’s not for nothing that esports has long been singled out as an independent discipline. There is an interesting pattern: video games are directly related to war (armed conflicts have always given a powerful impetus to technology), but at the same time they remain the main attempt to “fix” war. To make it more honest and fair, to help the “right side”, for example, in numerous Pearl Harbor simulations. After all, to give conflicts between people at least some meaning.

Geeks and nerds may play games, but they are certainly created by idealists.

Creative workshop “Agrafka” “Where and from where” (“Old Lion Publishing House”)

Where and from where? This question is most often heard at the airport, train station and even in a city bus crashed. Remember a life full of adventure and cheap tickets from low-cost airlines? Back then, Google’s phrase “Look where you were this month” didn’t seem like a mockery like it does today. However, even though now the borders between states have turned into physical barriers, we can still travel – for example, thanks to books.

The design union of Andrey Lesiv and Romana Romanishin “Agrafka” has created a visual masterpiece – a travel book “Where and Whence”. Brief facts about movement in space – when the first supersonic flight took place, why flying from west to east faster than from east to west, who created modern tourism – are combined with visual stories.

Agrafkov’s recognizable manner of turning every static image into a dynamic one is the best fit for describing travel and movement. Herds of zebra-like barcodes jump from page to page, bison fly through the green space, reminiscent of images on the walls of the Lasko cave, cut through the pages of swift birds that look like perfect fighters.

Trains, planes, crowds – everything migrates and moves. Facts and words become just an excuse, an impulse for the deployment of a visual story, since the main action takes place in the graphics. Yellow, red, black, blue – artists choose pure colors without smooth transitions, so the energy just flows from these pages.

Did you know that the Arctic tern flies an average of 70 thousand kilometers per year? And a mountain goose travels at an altitude of over 7000 meters – that is, where are the planes? Yes, I envy both of them too. However, we will still have it. In the meantime, leaf through Where and Where.

Arthur Haley revealed for us the work of the hotel, gas station and news agency, but said nothing about how the traveling circus works. But the circus is a childhood dream, a real carnival on wheels, the opposite of the gray routine. Perhaps this is what the protagonist of Sarah Gruen’s novel Water for Elephants thought when he discovered that, running away from problems, he jumped into a circus rather than a regular train car.

Just a week earlier, 23-year-old Cornell University student Jacob Jenkowski still dreamed of becoming a veterinarian and leading the respectable life of a typical middle-class. But within a few days the descendant of Polish emigrants loses his parents, home, family business and soon finds himself in a traveling circus – “The Magnificent Show of the Benzini Brothers”. In the heart of a colored mess of elephants, zebras, monkeys and bears, the novel opens with a scene of animals running from a circus menagerie. This is how the traveling circus worked during the Great Depression; this is probably how it works now – chaotic, chaotic, unpredictable.

The circus gathers everyone who lacks a place in the respectable world of lawyers and bankers. Everyone who ended up on the margins and now has to somehow survive. “Tent with monsters” – as a greeting from a medieval fair with its thirst for unpretentious spectacles.

If human nature manifests itself at the moment of the highest test, then in a circus this moment of tension is stretched in time. Everything here is built on overcoming oneself. And also – on the hopelessness, ruthlessness, hunger, cruelty to animals hidden from the audience. Selling emotions, playing happiness or triumph, insult or anger on stage, the actors gradually begin to believe in it, until their existence turns into a terrifyingly ridiculous imitation of life.

However, it is in the circus that the loser veterinarian Jacob finds friends, enemies, love and the best companion in his life – the elephant Horn. And he also realizes who he wants to be, what place to take in the world. History proves once again: cooperation between humans and animals is possible only if we abandon the idea of ​​our natural superiority and will not only speak, but also listen.

We learn this whole story from old Jacob, who is either 90 or 93 – he just can’t remember. Against the background of the colorful journey of the circus across America in the thirties, another journey unfolds – a quieter, more melancholic: the protagonist into his past.

Sarah Gruen has written a surprisingly insightful novel about circus and a time that cannot be returned. About death and love, which for people and elephants is one for life.