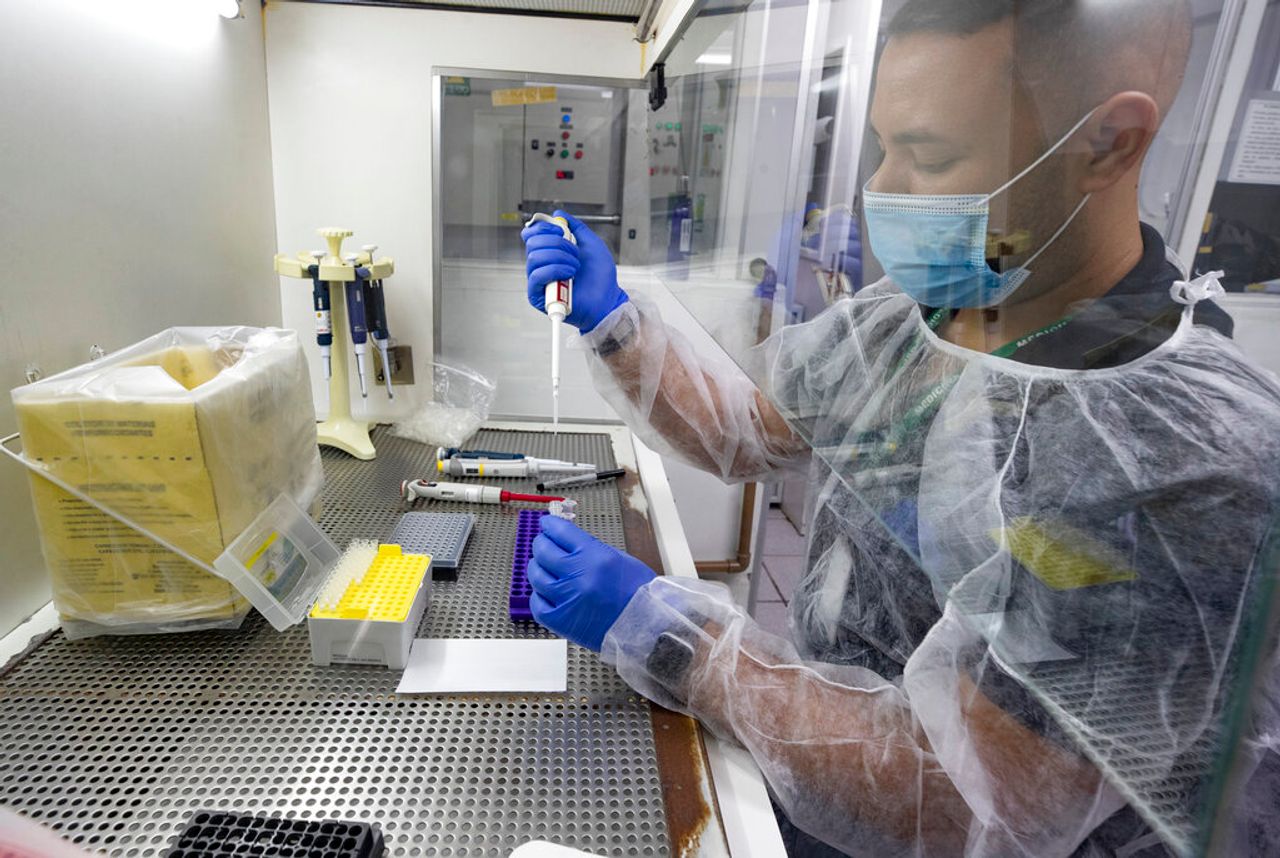 The director of the US Disease Control Agency CDC, Rochelle Walensky, said in an interview with presenter Ari Shapiro of National Public Radio that she was extremely concerned about the course of the pandemic over the next few weeks. She did this in a way that is seldom the case among senior officials.

She said, “In the next two or three months things could go in one of two directions. If everything opens up and we’re not really careful, there could be just as much an increase in the number of cases after the spring break as there was after Christmas. There could be many more sick people and many more deaths. “

Similar concerns are being expressed across Europe, where more than a million new cases were reported this week after a sustained decline over the past six weeks. This means an increase of nine percent compared to the previous week. The regional head of the World Health Organization (WHO) for Europe, Hans Kluge, said on Thursday: “We are experiencing a resurgence in the Central and Eastern European countries where the rates were already high.”

The health system in the Czech Republic, which has been particularly hard hit, continues to face significant pressures. Kluge called on states to return to “the basics” of public health measures. The surge in infections is a result of the easing of restrictions and the increasing dominance of the more infectious strains of the coronavirus.

According to a map from the CDC that lists the variants of Covid-19, there were 2,506 cases of B.1.1.7 variants in 46 states as of March 2. There have been more than 100 confirmed cases in Florida, Michigan, New York, Georgia, Texas and California, among others. The strains B.1.351 and P.1 with a reduced immune response also spread, although not to the same extent.

The virologist Dr. Michael Worobey of the University of Arizona called for more attention to be paid to variant P.1 in the USA. He expressed the fear that it could spread further, even if it competed with variant B.1.1.7. Compared to the New York Times he explained: “At least she will take part in the competition.”

These developments have tarnished the earlier optimism many scientists initially showed when the use of effective vaccines against Covid-19 began in December. The strains from South Africa and Brazil have been shown to be more easily transmitted, reduce the effectiveness of the vaccine, and could even bypass immunity from previous infections.

For the 150th birthday of Rosa Luxemburg

The director of the Institute for Health Metrics and Evaluation (IHME), Dr. Chris Murray, raised concerns that the South African variant or other variants with similar mutations could spread and become the dominant variants. Inpatient treatments and deaths from Covid-19 could then be four times greater than from the flu next winter. He told Reuters that in the worst case scenario, this would mean up to 200,000 more deaths from Covid-19. These figures are derived from government estimates of annual flu casualties.

Public health officials are increasingly reluctant to respond to media questions about when to expect a return to normal. Dr. Anthony Fauci, President Joe Biden’s principal medical advisor, said, “Even after vaccination, I would still want to wear a mask if there was one left in circulation. All you need is the emergence of a variant that triggers a new increase in the number of cases, and the forecast is already wasted. “

In an interview with Wired he explained, “We shouldn’t announce victory too soon. We don’t want the current decline to persist at a level that is far too high. At the moment, 60,000 to 70,000 people are infected every day. That is clearly too much to be acceptable. ”This level is comparable to the highs during last summer.

Health officials in Texas and Mississippi reacted with great concern to the state governors’ decision to lift restrictions such as mask requirements and allow shops to be fully opened. Texas Governor Greg Abbott tweeted blatantly: “OPEN 100 PERCENT. EVERYTHING. ”With such rapid maneuvers despite multiple strains of the virus circulating, scientists are concerned that an alarming increase in the number of cases could overwhelm healthcare systems again.

Biden criticized the governors of Texas and Mississippi for their actions with the words: “The last thing we need is a Neanderthal thinking that everything is fine now, we can take off our masks and forget it.” Hypocrisy when you consider that he calls for all schools to be opened up to 12th grade. New evidence has emerged from Canada and the UK that schools and children are driving vectors of transmission. In addition, the new variants appear to be most common in young children. The opening of schools will complement the rise in dominant strains of the virus and pour oil on a smoldering fire. An example of this is the December wave in Manaus (Brazil).

Since the beginning of the pandemic in the region, 18 variants of the Sars-CoV-2 virus have been discovered in the Amazon. One of them, variant P.1, developed into the dominant variant in November and was already responsible for 51 percent of the samples sequenced in December. In the first half of January, P.1 was responsible for 91 percent of the coronaviruses sequenced. This meteoric surge has been accompanied by dire misery and death as the hospitals and intensive care units run out of medical oxygen.

See Also:  USA must show goodwill and shed a feeling of superiority_China.org.cn

In Brazil, the number of new infections and deaths continues to rise to a record level every day. With the country’s health systems and intensive care units under extreme pressure and on the verge of collapse, President Jair Bolsonaro continues to say there will be “no lockdowns”.

The country’s health ministers’ association said in a statement: “The spread of the epidemic in several states is leading to the collapse of public and private hospital systems, which could quickly spread to all regions of Brazil.”

Oxford University, Imperial College London and Sao Paulo University recently conducted a joint study on the Brazilian Variant P.1 according to which this is between 1.4 and 2.2 times easier to transfer. It was also able to bypass 25 to 61 percent of the protective immunity from previous infections, which cast doubt on the effectiveness of current vaccines. More importantly, however, they tried to understand why the December wave in Manaus had surpassed the April wave in terms of both the number of cases and the intensity of transmissions, even though much of the population had already become infected in April.

Apart from the significantly higher transferability – even compared to variant B.1.1.7 – the mutations in variant P.1 also help the virus to escape antibodies from previous infections. According to the New York Times estimate the virologist Dr. Nuna Faria of Imperial College and his team of researchers, who lead the research, stated that “of 100 people infected with a strain other than P.1 last year in Manaus, between 25 and 61 people could have re-infected if they did have come into contact with P.1. … Dr. Faria stated that ‘growing evidence’ suggests the second wave was the result of re-infection. “

Reinfections do not necessarily have to lead to serious illness, as the immunity of the T cells can weaken the extent of future infections despite reduced antibodies. However, there are still difficulties in achieving herd immunity through natural infections or vaccinations, if already infected or vaccinated people become infected again and can become vectors for further transmission. Variant P.1 has spread throughout Brazil and 24 other states, including 13 cases in seven US states.

Given these results, it is necessary to take all measures to limit the transmission of the virus as much as possible. The concept behind the “Zero Covid” strategy implies that strict containment measures are maintained for a certain period of time and combined with social support for the population in order to reduce the daily rate of new infections to close to “zero”. A strict lockdown for two months could reduce the number of Covid cases to almost undetectable values, even if the new variants gain dominance. At the same time, the number of deaths would decrease six-fold.

This would allow local and state governments to strengthen public health infrastructure and run mass vaccination campaigns with support from federal agencies. In addition, these vaccines must be produced and distributed in many regions of the world in order to make enough of these life-saving treatments available. Dealing with the first phase of the pandemic requires preventing deaths and disease rates as much as possible while protecting health systems. The world’s ruling elites are subordinating their response to the pandemic to the demands of the capitalist market and have thus proven incapable of handling the task. Therefore the working class must intervene on the basis of a socialist program.

At the WHO virtual press conference on March 1st, Director General Dr. Tedros Adhanom Ghebreyesus: “It is unfortunate that some countries continue to favor younger and healthier adults in their own populations over health workers and the elderly. The states are not in a race against each other. We are in a joint race against the virus. We do not ask any country to endanger its people. We call on all countries to join the global effort to suppress the virus everywhere … We call on all governments and individuals to remember that vaccines alone will not make them safe. “

Take part in the Action Committees for Safe Education!

Governments across Europe are not doing enough to contain the pandemic. Therefore, students and young workers must take responsibility for their own health and the lives of their loved ones.