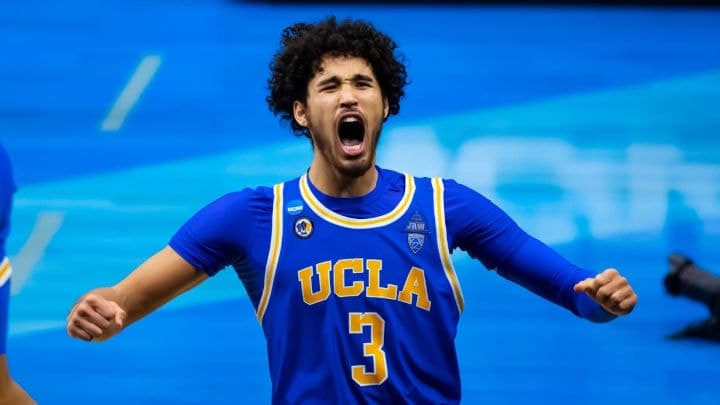 Normally, you already know his name! Beyond Jalen Suggs, no player has impressed or been more talked about as the sensation Johnny juzang at the last NCAA tournament! The outside of UCLA led the Bruins into an absolutely stratospheric March Madness, passing obstacles one after another in a tournament where no one expected them! UCLA had even started with the First Four, repechage match, to reach the final table, before shocking the world game after game, eliminating title favorites like Alabama or Michigan! Ultimately, it was in the semifinals that UCLA’s legendary run came to a halt against Gonzaga, in a game that is already etched in NCAA history, where the 29 points of a Juzang totally on fire (12/18 ) will not have been enough to stop Jalen Suggs in the last seconds, author of one of the greatest buzzer beater in all of NCAA history. Without demerit, Johnny Juzang will not have been able to take UCLA to the impossible and the title of national champion, but he still took advantage of this resounding course to make a place on the radar of all the NCAA scouts. Such performances on the biggest college stage have bound to attract attention. So what to expect in the NBA from the Bruins phenomenon? Presentation.

Johnny Juzang first made a lot of talk about him because he is a player definitely beautiful to watch. He has this innate sense of the game, with a natural ability to create his shot to plant from any distance, even if well defended. Juzang is a player who can catch fire at any time with smooth and fast shooting mechanics, the streaky shooter by definition ! If his shooting percentages may leave you in doubt at first, the visual impression and the advanced stats don’t lie. Juzang shot 39% on catch and shoot this season, and at 47% on shots out of dribbling, and we don’t even talk about the offensive festivals of March Madness… He’s an efficient high-volume scorer, who likes big moments and ends of possession. In other areas of the game, it is versatile without being great, for example with a good handle where he has in any case avoided losing too much the ball despite his heavy use misses. Otherwise, have you been told he’s an absolutely fabulous scorer, capable of catching fire anytime? We see in him a possible very good third offensive option or at least a sixth man scorer, anyway he will weigh on the score in the NBA.

Physically, Johnny Juzang is a rather paradoxical player. First, because it lacks explosiveness. Ball in hand, he struggles to be an even more formidable scorer because he lacks a drive quite serious and this, in part because of this lack of dynamite which prevents him from being sharp enough on his first step to create enough space vis-à-vis his defender. When he goes up to the drive, he also lacks touching to really see his percentages soar near the circle. In defense it’s the same theme, since his body is athletic enough to imagine him becoming a perfectly acceptable defender in the future. However, he does not move his body enough in 1v1 at the moment and we will wait for real progress to see him become better than passable on that side. For the rest, Johnny Juzang does not have at all the vision of the game necessary to imagine him to be anything other than a player who will only create his own shot, which will limit his development. Nevertheless, it will be used a lot off the ball, with a few balls to be used, of course, but with the necessary confidence to let it express itself as a soloist. His shooting selection was also questionable at times at UCLA, but when it comes in, it’s a piece of cake.

Johnny Juzang is a very spectacular player who should find in the NBA an environment very suited to his personality on the pitch, and although his precise role is yet to be defined, he has all the qualities necessary to make his place in the big league and contribute with more or less importance in a rotation. Its efficiency will define its use, and if it maintains its March Madness standards, it will at worst make a very serious scorer option out of the bench to use late in the game. In view of his intermediate potential, we want to start dreaming by sending him to Detroit. In a team where he would find Cade Cunningham and Killian Hayes at creation, we have the feeling that Juzang would have all the space necessary to finish very many actions, where his trainer could even use it on post 3 as was much the case at UCLA. With two picks at the start of the second round, we can think that the Pistons will aim for potential in 37th place, before making a safer choice thereafter which Juzang would represent very well. Finally, the biggest adaptation for the UCLA prodigy will undoubtedly be to spend the fiery evenings of the Los Angeles campus to the dark and narrow streets of a neglected Detroit. However, he is trusted to ignite the streets and the fans of his future team as he did so much last March. It’s a walking flamethrower.

To find all the profiles of the 2021 Draft on Inside Basket, click here!