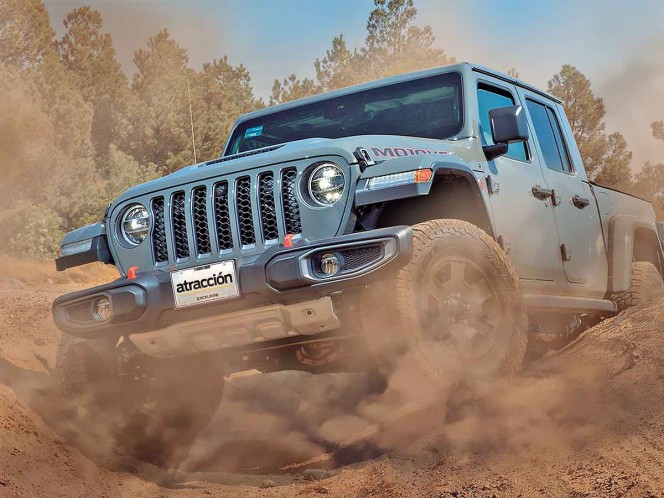 DThey say that when others just go for the milk, Jeep is already back with the cream ready and the execution of versions like the Gladiator Mojave is a clear example of that.

The most popular off-road vehicle brand in the world seems to have no peace of mind, because while in some segments it is multiplying its offer with special editions and versions more focused on better performance, in others it is completely reinventing itself and incorporating products totally new, to take the firm to where it has never been before.

With the Mojave version of the most customizable pickup in the world, comes a vehicle that specializes, as the name implies, in the desert.

And it is that when this name was chosen to differentiate this Gladiator from the rest, it was thought not of version 10.14 of Apple’s operating system, but of the famous North American desert located between California, Utah, Nevada and Arizona, named after the people. Mojave Indian.

In such a way that this category has endowed this pickup with unique qualities, specifically developed to improve its performance at high speeds on sand and desert territories.

When we saw it for the first time, at the Chicago Autoshow last year, we did not imagine that it was a version that modified its behavior so much, because aesthetically it was very similar to the Gladiator in its Rubicon version.

However, the Desert Rated category has made use of a number of technological innovations, such as a new suspension, which integrates hydraulic front bumpers to better adapt to sandy conditions without compromising the stability of the pickup, more solid axles. and the most recent update to the 4×4 Command-Trac system, to make it the most evolved Jeep when it comes to running in the sand, guaranteeing resistance to bouncing on high-speed off-road trips.

And it was precisely there, in the flow of a dry river, where we put its capabilities to the test. We couldn’t believe that the stiffeners that Jeep engineers put into the chassis were so helpful in keeping this behemoth under control, which, no matter how loose we found the road surface, was always able to carry us on the desired trajectory.

The Mojave, on the outside, incorporates subtle touches that do not give it away as the leader of the pack, however, some aesthetic details will allow us to differentiate it from any other, for example, the gray paint bath that received the body (special for this version ) mixed with small touches of orange, as in the tow hooks.

On the hood they have placed a central air intake, although the most interesting is under the body.

To ensure the necessary force to get you through any maneuver on and off the tarmac, this Gladiator is powered by the well-known 3.6-liter Pentastar V6 engine, which is capable of developing 285 horsepower and pushing with 260 pound-feet of torque. , thanks to the management of an eight-speed automatic transmission.

In no maneuver and under no circumstances does the engine feel lacking in power and is even capable of pulling 2.7 tons and carrying up to 550 kilograms.

Inside, comfort is provided by huge leather-covered seats, which guarantee good support and are complemented by an advanced Alpine 9-speaker audio system, which is accompanied by an infotainment system whose touch screen is 8.4 inches and projects the fourth generation of the Uconnect system.

See Also:  This is what love looks like: Megan Fox and Machine Gun Kelly on a romantic date

Although the Gladiator is a pick-up that we had already driven on different roads, the Mojave version showed us again, on the way to Valle de Bravo, that both inside and outside the asphalt it is a comfortable vehicle and well prepared to face any scenario. .

In history, this pickup will be registered as the first to be marketed under the Desert Rated nomenclature, which developed a specific ride and stability, with a suspension calibrated for sandy terrain that does not compromise comfort, even in the most adverse maneuvers; traction in these conditions, increased ground clearance, axle length, and 33-inch tires for better maneuverability and reinforcements to withstand extreme heat, coarse sand, loose gravel and dust that they often accompany harsh desert environments.

We invite you to see our content on networks of: