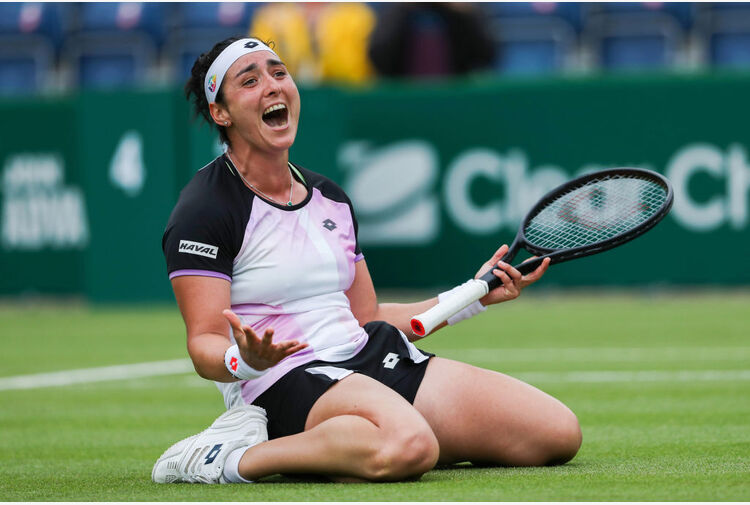 “I have had so many disappointments during my career, I think what I appreciate most about myself is the fact that I have remained strong and have always believed in myself”. In the moment of ecstasy, immediately after kneeling on the grass in Birmingham to celebrate the success of Daria Kasatkina – the first solo, in the third final, the first ever of an Arab on the WTA Tour -, the 26-year-old Tunisian immediately recovered. his coldness, unleashing the usual, very strong, personality.

The one that had already opened the doors of the history of sport to her as the first Arab to sign an under 21 title, at Roland Garros 2011 (redeeming the final lost the year before), to then overtake as a professional, with the ranking-record of 24 of the world, the primacy of an Arab in the WTA Tour of Selima Sfar (who had reached number 75) and then set a new milestone by reaching the quarterfinals on the hard of the Australian Open 2019. To reaffirm her technical versatility with the two fourth rounds on the red clay of Roland Garros in the last two years and now with the title on the Birmingham grass.

The girl with a smile invents tennis with mellifluous damps, sudden accelerations and variations of angles and ball cuts, with a very personal style that she defines “my crazy shots” and which represents an exciting oasis of diversity in an increasingly powerful and uniform with violent arms from the bottom.

Ons has always rebelled against the small reality for which it seemed destined: just 167 centimeters high, it is certainly not a phenomenon of power and comes from a country without a tennis pedigree, tiny like Ksar Hellal (50,000 inhabitants), who has barely left since the age of three. the racket that her mother had given her to then wander among the tennis courts of the hotels and emigrate further and further away to learn the art until she was already sixteen in Belgium and France.

She had to operate early on her wrist and had a long apprenticeship in ITF tournaments and then won eleven. His perennial thanks goes to his parents: “They sacrificed many things. Mom took me all over Tunisia to play tournaments and encouraged me to attend a special school. It was a great sacrifice for her to lose her little girl to let a dream chase that, honestly, wasn’t 100% guaranteed. He believed in me and gave me the necessary confidence ”.

Although, as a faithful believer, she is above all convinced that her fortunes on earth, certain net, certain lines, which accompany her on the field, are born from up there: “Yes, it’s true, I often look up, to God, I have to thank him of this possibility that it gives me. It seems that he, the universe, everyone wants him to win ”.

Today, after this “long and hard transition, from junior to pro, after this long battle to win the first WTA title, after climbing the Grand Slams, first, second round, first, second round …”, Ons Jabeur the tennis pioneer Arab is authentically and evidently happy: “I am very proud because I finally see that hard work is paying off”. Ons has a secret weapon, irony: “Unlike the first two lost finals, this time I didn’t win the first set”.

Even if the pressure is mounting: “Now people in Tunisia are more interested in tennis and are more and more excited by my results. But he is no longer satisfied with the fourth round in a Grand Slam, he would like to see me win a Major. I wish it were that easy. So I feel the pressure but there is also a lot of joy and motivation to inspire more and more young people ”.

The pressure, if possible, increases: “I am playing not only for me, I am playing for an entire continent. In other countries they have many other players, not just one. Sometimes it’s hard to argue: I’m just a human being and sometimes I listen to the negativity. But I’m learning to say enough. I’m learning not to listen. I’m learning to focus on myself ”.

She proudly opposes this easy thesis: “People don’t know what I’ve been through and how hard you work, I’m one of those who work the most. I worked hard to have this talent, I also did many sports before, handball, football, so I developed touch and contact with the ball but for a long time, in developing my tennis career, it didn’t help me. I did it thanks to patience, focusing more on the positive things than on the negative ones ”.

The new queen of Birmingham who finds the ideal conditions on the grass to show off her touches of fantasy has very clear ideas: “I know what the goal is and I’m focused on that”.

Just to be clear, the media have contested the choices of her team, and she, proud, replies as soon as she can in front of microphones and cameras that besiege her: “The work we are doing is taking me to the top. With coach Issam I go great and also with my athletic trainer, Kareem. It does not matter that he is my husband and it does not matter that he has not worked with many players before, I know that he is good and if one day I see that I do not improve physically, we will discuss and see what happens. For sure yesterday I was the only one who played three matches between singles and doubles… And I won them all ”.

Even though the transition from clay to grass was not easy, like all of Ons’ existence: “Everything was going too fast, I couldn’t put a ball on the pitch, I just didn’t know what I would do in Birmingham on a surface that I’ve always liked it and where two years ago I won an ITF tournament. My coach reassured me, we took one step at a time, as always, and the plan worked… I won my first WTA title ”.

Ons is already beyond, thanks to his past: “It occurred to me when I had an operation on my wrist and then, returning to the field to train, five months later, the balls flew everywhere, without control, without end. People looked at me and made fun of me: ‘You have to stop tennis’. Thoughts like this make me stronger ”.

It is always a question of order and priority with oneself: “As a young man, at the beginning, I hit the ball as it came to me, following my personality. I like funny and crazy things, I like original things. I am also amazed at how many shots I can make so much that sometimes it is difficult to choose the right one. Putting my game in order helped me to grow in everything ”.

But if someone suggested that she stop with short balls, she replied then as now: “Yes, yes, you’re right”. But he didn’t listen to it, and he doesn’t listen to it now either. “I’m the one who plays on the pitch, I’m the one who hits and takes responsibility, for better or for worse.” Only she is Ons Jabeur.