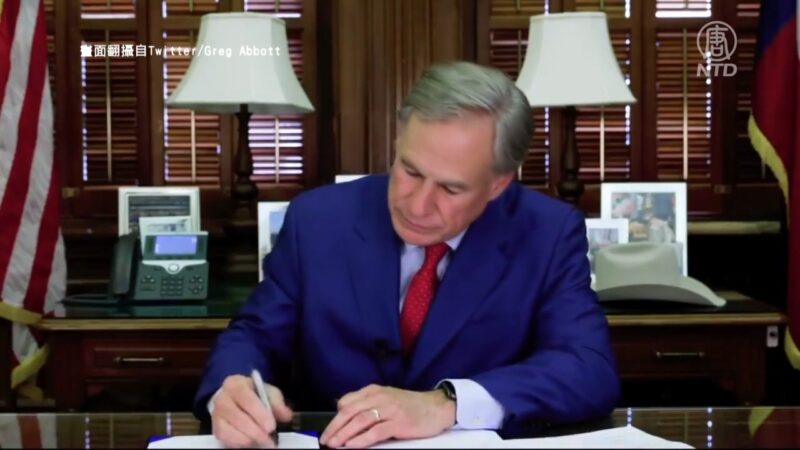 [New Tang Dynasty Beijing time June 11, 2021]At present, many states in the United States have issued laws prohibiting governments or companies from using the so-called “vaccine passport” to force employees or customers to vaccinate. The American Civil Liberties Union believes that there are many problems with the “vaccine passport.”

Texas Governor Abbott: “Any business or government entity shall not require individuals to provide vaccine passports or any other vaccine information as a condition for receiving any services or entering any place. I want to thank the Texas legislature for sending this bill Come to my table.”

The Governor of Texas, the United States, Abbott, officially signed a law on the 7th, prohibiting government entities or private companies from requiring people to provide vaccination certificates or vaccine passports as a condition of service or entry in Texas

. According to a report in the English version of the Aspen website, as of June 10, 16 states in the United States have issued laws prohibiting “vaccine passports” to varying degrees, which stipulate states that neither government agencies nor private companies may use them. There are 9 states including Alabama, South Carolina and Florida.

Jim Hanson, Chairman of the Security Studies Group, a non-profit organization: “I think this is a wise move to formulate some basic rules about what government agencies can and cannot do, including a state-owned enterprise. At this time, I We know that there is an epidemic, but this does not mean that we want to abolish the personal freedom that everyone enjoys in this country.”

See Also:  a working class which raises its head and organizes itself

The Houston Methodist Hospital in Texas, USA, once forced medical staff to complete the Chinese Communist virus vaccination before June 7. 117 employees formally filed a class action lawsuit against the hospital, accusing the hospital of treating them as white rats and forcing them to They are vaccinated.

The Biden administration’s current attitude towards vaccines is that it strongly recommends the people to administer the vaccine, but does not require administrative departments or agencies to force employees to vaccinate.