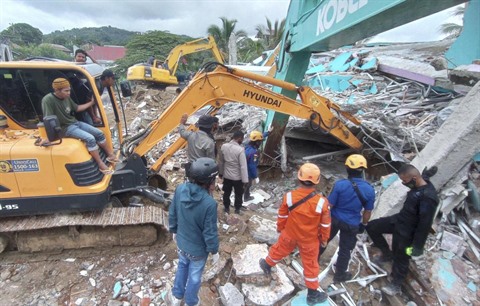 The 6.2 magnitude earthquake that occurred overnight left several hundred injured and triggered panic among residents of the west of the island of Celebes, who already suffered a major disaster in 2018.

“According to the latest information there are 26 dead, all in the town of Mamuju”, said Ali Rahman, head of the local disaster management agency. “This number could rise (…) many dead are buried in the rubble”.

Eight other people died in Majene, another town in the Mamuju region, another local agency official said.

In Mamuju, the most affected city in the region, rescuers were looking for more than a dozen patients and medical personnel missing under the rubble of a hospital.

“The hospital is destroyed. It has collapsed. There are patients and hospital staff trapped in the rubble and we are evacuating them.”, said Arianto, a Mamuju rescue official.

He estimated the number of people trapped between 10 and 20, without being able to confirm whether they were alive.

The extent of the damage in the provincial capital of some 110,000 inhabitants was not immediately known.

“The roads are shattered, and several buildings have collapsed”, said Hendra, a 28-year-old witness living in Mamuju. “The shock was very strong (…) I was awakened and I fled with my wife”.

The meteorology and geophysics agency has warned of the possibility of further tremors and asks residents to avoid the seaside because of the risk of a tsunami.

“The aftershocks could be as strong or stronger than this morning”, said Dwikorita Karnawati, the head of the agency.

Thursday, January 14, a shock of 5.8 had already been felt in the region, without causing significant damage.

Landslides followed the earthquake, cutting off access to one of the province’s main roads, and the local Mamuju airport was also damaged.