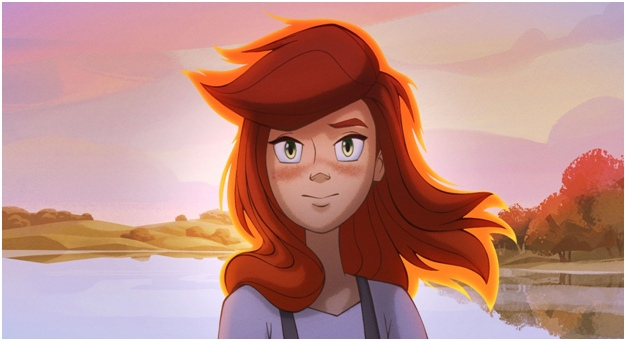 Have you noticed how quickly traditional animation has become a niche, both as a product and as a craft in general? Young 3D came to us in the mid-80s of the last century. It seemed like something strange, hopeless and unjustifiably expensive. Especially against the background of all the familiar and reliable traditional 2D animation.

The first “Toy Story” in the mid-90s had the effect of an exploding bomb, and on the very first weekend raised the amount to cover the budget of the cartoon itself. It took us less than 40 years to completely turn the world of animation upside down. Now traditional, frame-by-frame animation in the eyes of investors looks outdated, difficult and time-consuming to produce. And I’m really scared that they might be right.

“Ogonyok-Ognivo” from the “Up” film company has become a real animation event. The cartoon carries two seemingly mortifying labels: traditional, domestic animation. Try to remember the last time you heard or read these words in one sentence without mentioning the three knights and the talking horse? Personally, I am the first to think of various YouTube craftsmen, like the Phoenix studio and the hotly awaited Cyberslav of the EvilPirate studio. But “Ogonyok” is a slightly different type of project.

The main feature, a hook that should hook, in my opinion, is the author’s style of drawing and animation. I can endlessly praise the result of the work of artists and animators. The cartoon looks very lively, bright and, most importantly, stylish. Well-chosen colors, shapes and light give the picture the same effect of high-quality old animation.

You can pause the cartoon at any time, take a screenshot and put it on your desktop wallpaper. This is partly due to the competent stylization. The picture resembles either a drawing with wax crayons, or sparkling stained glass. The backgrounds are reasonably simple. Not very detailed, but with well-developed lighting, shadows and reflections. Unlike the characters, they have no outline. This gives the picture depth and keeps it sharp and beautiful. Characters are also made at the level. Moreover, not only the main characters, like Ogonyok, the Queen or the Potter, but also, for example, his friends-artisans, grandfather-archivist, a team of firefighters and even extras. Each has its own unique appearance. The animation is smooth, with expression and hyperbole inherent in the style. Every movement has weight. It is difficult for me to imagine the scale of work that the artists and animators of the Up studio had to do, because it takes about 10 days to create one minute of animation, even with a fully established production.

Separately, I would like to highlight the sound design and work of the cartoon composer Arthur Baido… Background sounds, flashes of fire, creak of mechanisms – all this is often combined with the sound of classical instruments. The voice actors did an amazing job. The music scenes are beautiful, relevant and don’t get boring, as is often the case in children’s cartoons. I really liked the way the film sounds.

A number of interesting solutions can also be found in the plot. The synopsis of the film reads: “The life of a good and poor Potter changes when he finds a flint – a magical item that makes its owner fabulously rich, but sends a terrible curse in return. The fire once belonged to the queen, who is now ready for any deceit, just to return this source of youth and wealth. ” The story of the cartoon is not so much based on the fairy tale of Hans Christian Andersen “Flame”, but rather inspired by it.

“Before starting to work on the film, we had a clear understanding that we want to make this particular fairy tale, but tell it as a fairy tale about love. And since there is little love from the original source of love in the witch’s head severed by a soldier, we came up with new characters who now live their original lives. Oh yes! The dogs remained. Copper, Silver and Gold, ”the creators said in an interview with the DTF portal.

Indeed, the story told in the cartoon “Fire-Flame” should be understood exactly as a fairy tale, with all its characteristic pluses and minuses. On the one hand, the creators came out with a very beautiful, not devoid of morality, story about the dangers of greed and envy. On the other hand, be prepared for a few “grand pianos in the bushes”. Solving the problems of the heroes of fairy tales can often fall on the hero from the sky. But the tone, atmosphere and pace of the cartoon are arranged in such a way that it looks quite appropriate.

And now you are probably wondering: “If this cartoon is so wonderful, then why am I hearing about it for the first time now?”

I’m afraid the answer will upset you: even I, a person who follows the world of animation, including Russian, learned about the cartoon less than a year before the premiere. Let’s start with the obvious. The cartoon was released in the harsh realities of the coronavirus quarantine. In an interview, the creators of Ogonyok-Ognivo told that they were planning a large-scale marketing campaign, however, all that the cartoon received in the end was a trailer in pre-rolls on YouTube, a couple of rare TV advertisements and a video featuring voice actors. This technique is used quite often in the West. People are more willing to go to a film if it has recognizable voices of their favorite actors. But in Russia, it seems to me, this has no effect. I love and respect Russian dubbing actors immensely, but, unfortunately, their number is small. My thought was best expressed by one of the Russian film bloggers – Cultas: “You have a divine drawing in your hands, and you show off Burunov and Oleshko. Yes, I know what you have on the voice acting Burunov with Oleshko! Everyone in Russia dubs Burunov with Oleshko! “

On February 27 at 4:00 pm, a post was published in the project group on the VKontakte social network, which said that the management had decided to permanently close the animation studio “Up”, and the cartoon “Ogonyok-Ognivo” failed at the box office. The team will be permanently disbanded, but the projects will remain in online cinemas. It is sad to see how many years of work of hundreds of people fail miserably. How an “endangered species” project of Russian traditional animation was killed by terrible marketing. The cartoon clearly deserves more.

Nevertheless, one should be happy and proud of the artists, animators, screenwriters and composers of the Vverkh studio. They were able to bring the project to the end and release the cartoon at the venues. It is worth remembering that sometimes even films that do not pay off at the box office become cult. Fight Club, Blade Runner, and The Big Lebowski eventually gained recognition and love from millions of viewers. Rejecting the bad, we can say: the cartoon clearly shows that the craft of traditional animation lives on to this day. Only time will tell if 2D animation returns or remains content from indie studios and enthusiasts to enthusiasts.