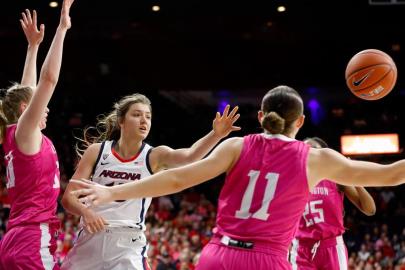 She was the first Spanish to play in an NCAA Championship final, after Maite Cazorla reached the Final Four two years ago. Helena Pueyo (University of Arizona) talks about an “unforgettable experience” and the luck of having a colleague like Marta García by her side.

“I still can not believe it. I never thought about being able to play an NCAA final. It has been an unforgettable experience. Right now I have not realized what we have done, and maybe later I will value it in another way ”

says a Helena Pueyo overwhelmed by her last month at the University of Arizona.

In her second year in the NCAA, Helena Pueyo has carved a niche for herself in the runner-up rotation averaging more than 22 minutes of play off the bench. He assures that it was not in the team’s plans to go that far: “Our goal was to be in the top three or four of our Conference. The Final Four was something that we had not raised at any point in the season. But we have gone game by game getting everything we had and we have reached the final. “

At just 20 years of age, Helena Pueyo has already made two big decisions. At the age of 15, he left his native Palma to travel to Barcelona and continue his training in the 21st century. Two seasons in LF2 where he played more than 50 games. At 18 he bet on the ‘American adventure’ and joined the Arizona Wildcats. “Last year we were also qualified for March Madness, but just before traveling, everything was suspended due to the pandemic” the Mallorcan laments.

And this year Helena Pueyo’s March Madness has been a real madness: “It is a different tournament than anything I have been able to play before. It lasts three weeks. We arrived in San Antonio one earlier. A concentration in bubble mode, with individual rooms, without being able to leave, with many rules … it has been a tough tournament psychologically. “ But sportingly, it has been a success for the Spanish player: “The truth is that once it starts, you only think about the next game and the next rival. Maybe the first ones could be easier, but they are all very good teams that can surprise anyone. It’s hard to stop and think much further. “

They beat Sony Brook in the first round, Brigham Young in the second round, to defeat Texas A&M in the sweet sixteen. Then it was Indiana’s turn in the quarterfinals, although for Pueyo the most memorable game was the semifinals: “The match against U-Conn was special, because nobody was betting on us. They were very favorites, but with the previous victories we already had a lot of confidence. We believed in ourselves and we achieved a very important victory. “

The Mallorcan player tells us about her experience in the United States. Now she admits to being very happy, because “It has nothing to do with last year, in which I had a worse time. It was my first year of adaptation, with a new house, a new team, a new life… but this season I have felt much better. I have been very lucky with the arrival of Marta García to Arizona. I live with her and we have a very good relationship. It is the moment to be able to speak Spanish with her and feel at home. “

And sportingly Pueyo claims to be “very comfortable. Here I have my role in the team, with enough minutes and I feel good in that situation. And throughout the week we have many hours of basketball, we work a lot of individual technique and I think I’m making progress in my basketball. “

And the future of Helena Pueyo? The first thing you want is to finish the academic year and meet again with your selection of training: “A few days ago I was speaking with a colleague and we were discussing it. We always saw each other several times a year and now we have not met for a long time. I really want to go back to Spain and prepare for the U20 European Championship. “ From there… “At the moment, I have two years left at the University and then we’ll see …”

See Also:  The Rangers end their losing streak and crush the Dodgers