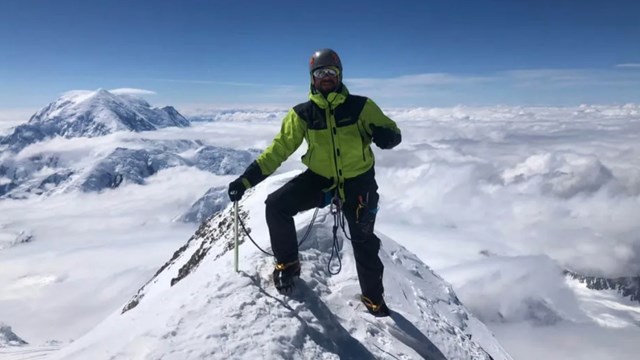 Mount Denali or Mount McKinley is the highest mountain in North America, with an altitude of 6,190 meters above sea level, it is located in Alaska.

The Hernandense met the new challenge of flying the flag by performing Tribute to Malvinas veterans, as in all their previous promotions.

Weeks ago he managed to write down Mount Denali on his list, very close to the north pole, 320 km away: “This was one of the most difficult, having to face 35 degrees below zero and winds of more than 50km per hour the day I reach the top. “

Mount Elbrús, known for being the roof of Europe, was his previous objective. But after that he was diagnosed with heart problems and had to withdraw from activity for a while.

“They detected an arrhythmia and they told me that I would never be able to do sports again, I spent two years doing nothing. I went back to training at the beginning of the year and 6 months later the opportunity was given to Mount Denali. “

In March of this year, the opening of Denali Park was confirmed. The trip was organized in the middle of the pandemic. “In June we got the park ranger qualification, we had to arrive by plane, although we spent more than three days trying to get to base camp, the weather conditions did not allow it, but we succeeded.”

“None of us knew each other. Only the organizer knew each of us. We were 4 Argentines, a Chilean and a blind Mexican elite athlete.“

See Also:  Ilta-Sanomat (Finland): the film "Tuve" is shown in Russia, despite the ban on propaganda of homosexuality | Society | Inosmi

The excursion is planned to take between 15 and 17 days. For weather reasons it was extended to 24 days up the mountain. This ascent is passed between glaciers and snow, the thermal amplitude goes from 0 ° to -20 degrees if there is wind. But if the sun rises the temperature rises to 20 ° or more.

THE PHOTO THAT COULD NOT BE

“The photo is a slope that the Denali left me because the day of the summit was very hard. In the last four hours the wind picked up and the temperature reached -35 degrees. That made it difficult for us to arrive and stay at the summit. We were no more than 8 minutes. We tried to take photos and videos of the moment but the temperature complicated the batteries of the devices. But there was the flag that I carry everywhere, a badge, it’s an identification. Although the photo did not appear, the flag was there.

The mountaineer’s banner is a gift from a veteran of Hernando. Falklands