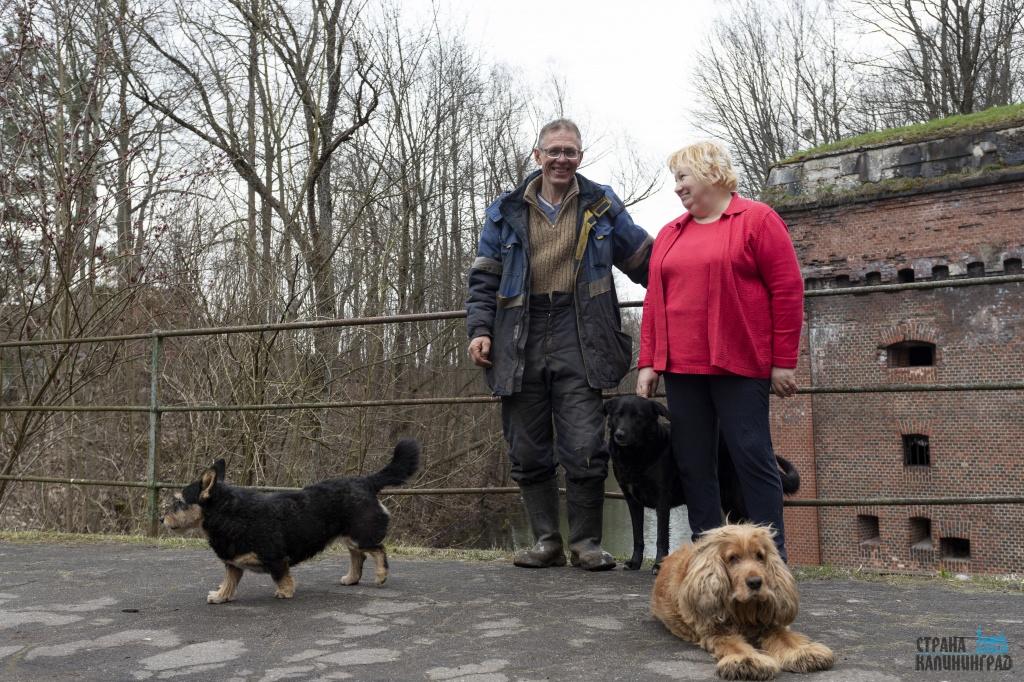 In Kaliningrad, every schoolchild knows that the city is surrounded by a ring of forts, which the Germans called the “Night Feather of Koenigsberg”.
In total, 12 large and three small, auxiliary, forts were built. Their fates have developed in different ways. Some of them are well preserved, others are in ruins. Some have excellent prospects, while others are dim. Somewhere life is in full swing, and somewhere desolation reigns and the wind walks.
With this article, the newspaper “Strana Kaliningrad” opens a series of articles “Ring of Time” about Kaliningrad forts. We start by serial number – from Fort No. 1, which bears the name “Stein”.

This fortification, built at the end of the 19th century, was originally called Louth, as a nearby village. Now it is Bolshoye Isakovo, which is now part of the Guryev urban district. Later, in 1894, Fort Louth was renamed Stein in honor of the prominent Prussian politician Heinrich Friedrich von Stein (1757–1831).
During the assault on Koenigsberg, the fort was not damaged, because it was located away from the main theater of operations. A significant part of the garrison was thrown into the thick of battles in other sectors, and with the remaining forces the fort could not offer serious resistance to the units of the Red Army. By the morning of April 9, 1945, he capitulated.
In Soviet times, a perfectly preserved structure, to the construction of which, by the way, the French captured during the Franco-Prussian war of 1870-1871 were actively involved, was used as a vegetable warehouse of the Kaliningrad “Gorplodovoshchtorg”.
A new era for the fort began in the early 90s, when the Laurushonis family settled in it, who lives there to this day, although they do not have the status that allows them to be at such an object.
It is worth clarifying that the family settled in an abandoned fort not because of a good life. There was simply nowhere else. Like many in those days, the Laurushonis started their own business, which consisted in the preservation of cultural monuments. But at some point something went wrong, huge debts appeared, and in order to pay off creditors, they had to sell the only apartment.
Initially, the basis for settling in the fort was a lease agreement. For many years, officials, considering it already invalid, have been trying to evict the Laurushonis from the state-owned citadel, which has long become a local landmark. Stanislav Laurushonis, together with his household, is still very successful in holding the defense.

Now in the fort, which area is 6,430 square meters, two people live: Stanislav and his wife Svetlana. They are accompanied by several dogs of different breeds, including the tiny toy terrier Lola. And then there is Knop, Chelsea, Bubble …
– Children have dogs, and then bring them to us, – explains Stanislav. – There is plenty of space, there is a lot of space. There is where to run. And we love these dogs. We have a clear division of tasks with them. Our mission with my wife is to guard the fort, and the mission of the dogs is to guard us. And not so much in the physical plane as, I would say, in the metaphysical one.
When the Laurushonis first settled in the fort, the eldest of their four children was eleven, and the youngest daughter was four. Now they are adults, everyone has their own families, at home.
“It so happened that this fort is my everything,” says Svetlana. – It is, of course, difficult here, there are no conveniences, and sometimes, especially when I return from a difficult shift at work, everything here annoys me, but, on the other hand, I understand that this place is dear to me. It’s hard to imagine life without him. I settled here at 29, now I’m 56 and have eight grandchildren.
As for all sorts of joys of civilization, then with them in “Stein”, indeed, not very much. Electricity – from a generator, heating – stove, water – from a well. Rather, it used to be from a well. But a few years ago it became impossible to take water from it. Now it has to be bought or taken from various sources outside the fort. And this sad circumstance, in the sense of the death of the well, according to Stanislav, coincided in time with the start of construction next to the fort of a large hardware store. It stands almost very close to the once formidable citadel. And for sure there is a technical possibility to conduct electricity from it to the fort. But there is no agreement yet. Maybe bye?

See Also:  Tsunami risk off Alaska after a magnitude 8.2 earthquake

However, all sorts of “fort” hardships and hardships oppress the Laurushonis not so much as a state of uncertainty.
“The only thing we want and dream about is legalization,” says Stanislav. – Then we could start to act – to carry out some restoration work. And we don’t need any help. The only request to the officials: do not interfere!
Generally, the fort is in good condition. But in some areas, something would not hurt to patch up. For example, the main entrance, from which bricks fall, requires repair.
– All this can be fixed by making the visitors safe, but we have no right to do so. We were forbidden to drive and excursions, and to carry out work. Neither there nor here. Do you understand?
At the same time, the interest in the fort from both local residents and tourists is enormous. They besiege the fort almost every day, but it holds on. It is impossible, therefore, it is impossible.

According to Stanislav, the fort does not require any special financial investments.
“I think we need to leave everything as it is,” he says. – Maybe just mow the extra grass, clear the paths. Let people walk, look, think.
At the same time, Laurushonis admits that it is possible to place hotels, restaurants in the forts, and somehow attract tourists in a different way. You can do whatever you want, the main thing is not to harm the building.
“Once I was at a conference at the Friedland Gate, where a Dutch forts specialist spoke. – Stanislav continues. – I then approached him and asked how many of the existing 93 forts they use? He didn’t even understand the question. What does “how much?” Mean. All are used. In different ways, of course, somewhere a museum is located, somewhere a hotel, somewhere just people live. But all the forts are in business, no abandoned ones. So I want our forts to live too. After all, we do not have so many of them in comparison with Holland. And this life can be different. But let Fort No. 1 be as it is now. Untouched, not reworked, not improved, authentic. I am for diversity. As Mao Zedong said, “Let a hundred flowers bloom!” The state should, of course, ensure that the owner does not harm the object, but at the same time they need a certain degree of freedom.
Laurushonis assures that he does not pretend to turn the fort into a business project.
“I just want to keep it so that people can see it the way it was intended,” he sums up.

Nobody even takes a ruble

About ten years ago, the building, which had already received the status of a cultural heritage site, was put up for auction. Representatives of the winning company, announcing big changes (as the local press wrote at the time, it was a question of creating a cultural and business center with a museum exposition, a chain of restaurants, a hotel and conference venues on the basis of the fort. – Author’s note), tried to evict the Laurushonisov, but not could. And then they somehow quietly left the stage. And the Laurushonis continued to live in the fort.
In 2017, the monument was included in the Rent for a Ruble program. The regional government hoped that there would be a hotel. In any case, as Klops (+16) reported four years ago, Oleg Ryzhkov, head of the Federal Agency for the Management and Use of Historical and Cultural Monuments, shared these plans with journalists. “As for the Stein Fort, there too (as in the Grolman bastion. – Author’s note) the most expedient function is a hotel,” he said.
But the plans are still plans. Over the years, no one was willing to rent the fort for the ruble.
– It’s only called so – “for the ruble” – laughs Laurushonis. – In fact, we are talking about serious investments. And besides, there are many different kinds of administrative barriers. As a result, people, after carefully studying the situation, refuse to take the fort. Expensive. And incredibly troublesome.
However, it’s not just about money.
– I do not exclude that there will be a person who will be able to take on this financial burden, – says Stanislav. – But here it is important to understand and love the place that you bought or rented. You need to live his life, feel him. Otherwise, there will be no sense …

Help “SK”
Baron Heinrich Friedrich von Stein, after whom the fort was named, is famous for the fact that, heading the government of Prussia, he carried out reforms to abolish serfdom, reorganize the higher institutions of power and the military system. In 1812, von Stein moved to Russia, where he headed the German Committee, played an important role in the liberation of Prussia from the French occupation.
In 1913, the baron was in Königsberg as the commissar of the Russian iterator Alexander I and contributed to the organization of the people’s militia.
It is important to note that von Stein is the author of several works on the history of Prussia.
The von Stein family coat of arms still hangs over the central entrance to the fort, which is a shield surrounded by curls.

Stanislav Laurushonis: “My wife Svetlana and I are guarding the fort, and the dogs
protect us “ 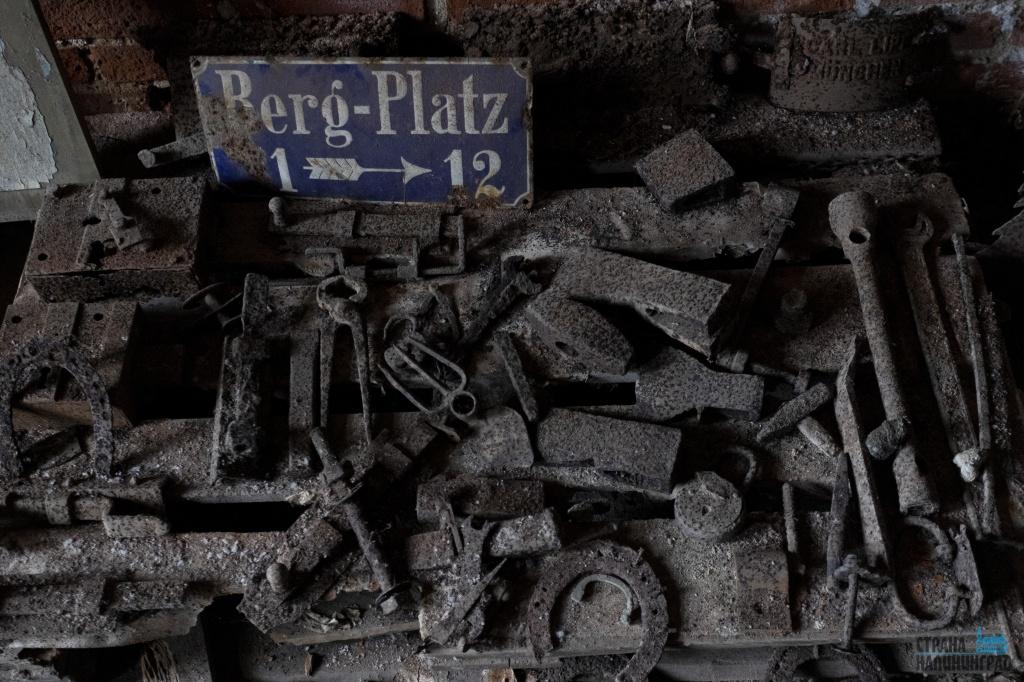 In some rooms, the couple placed exhibitions of those found in the citadel.
of things 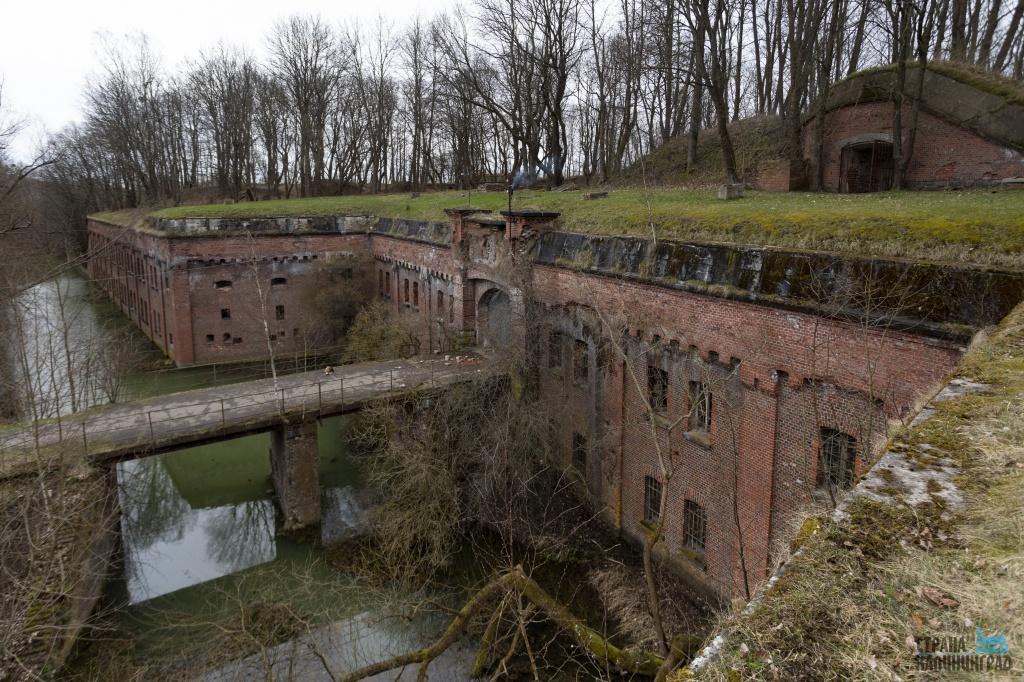 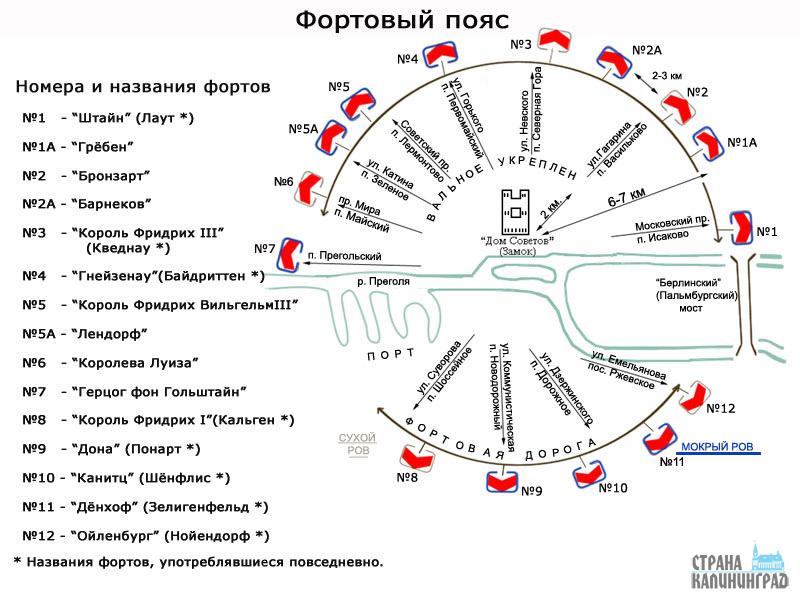 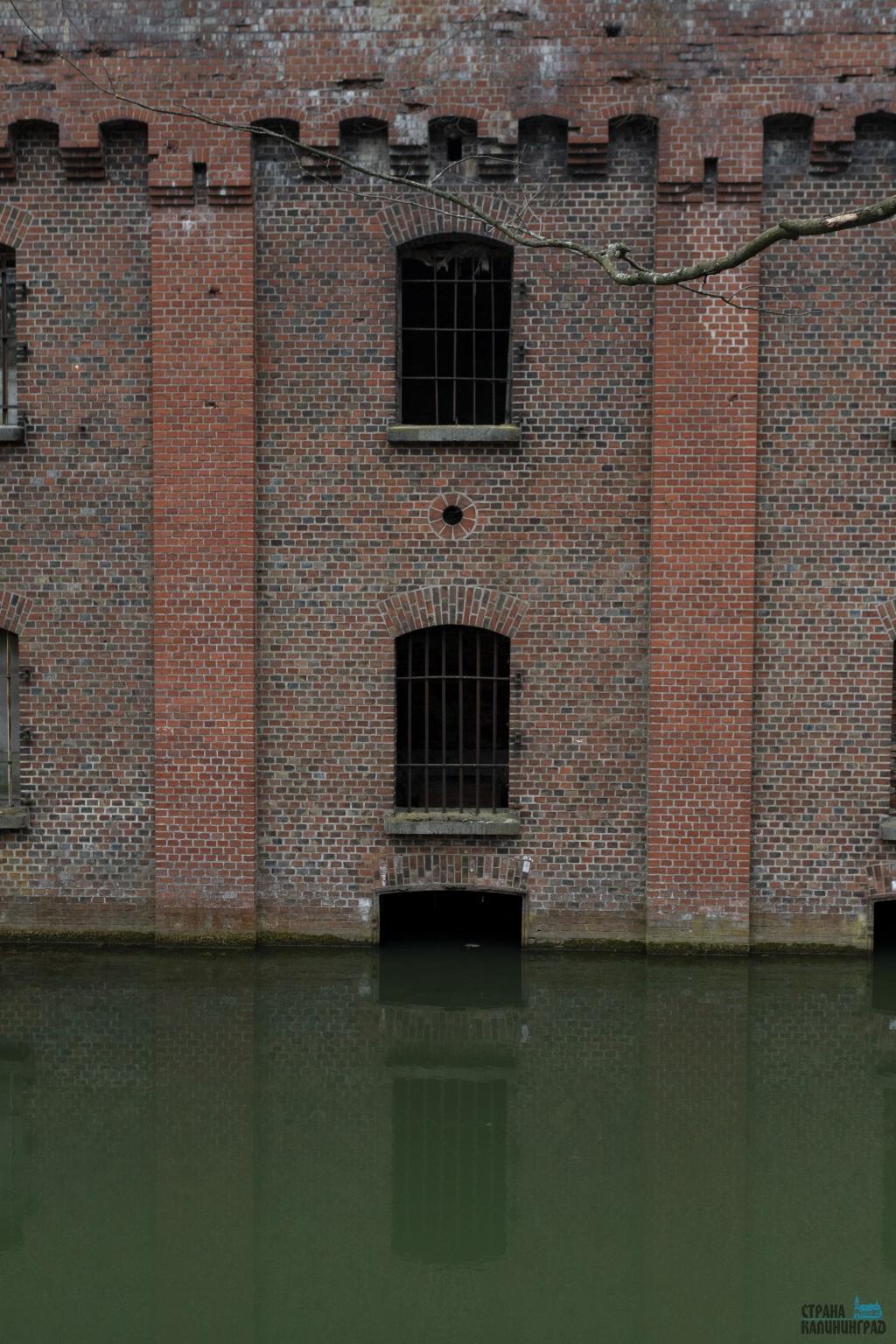 Red walls against the background of water – beautiful 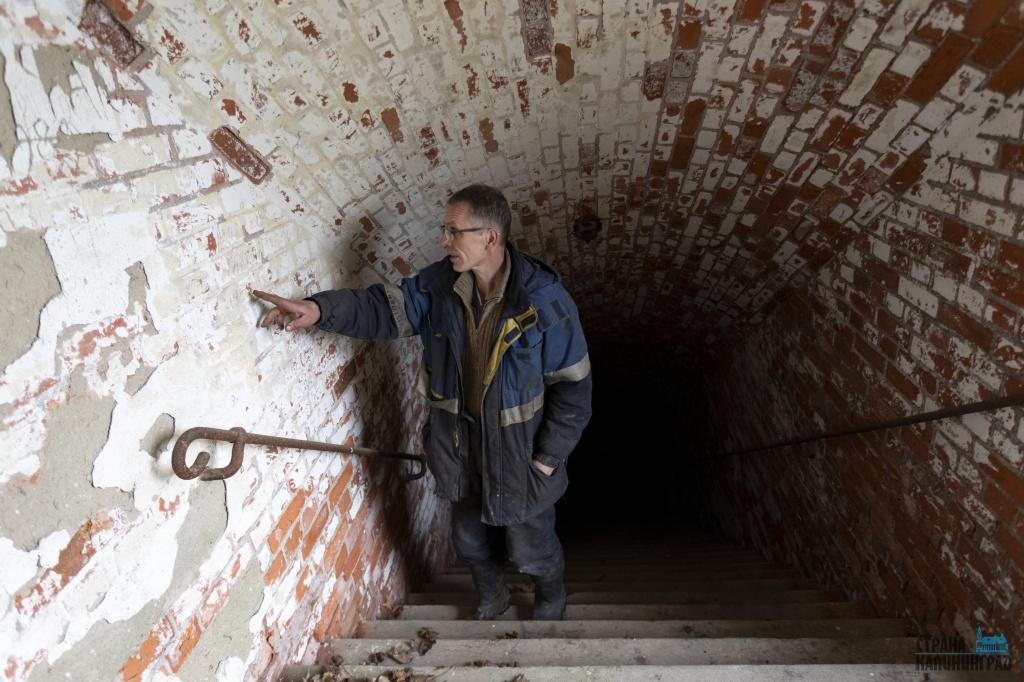 On the walls of the fort, shows Stanislav Laurushonis, you can see
german inscriptions 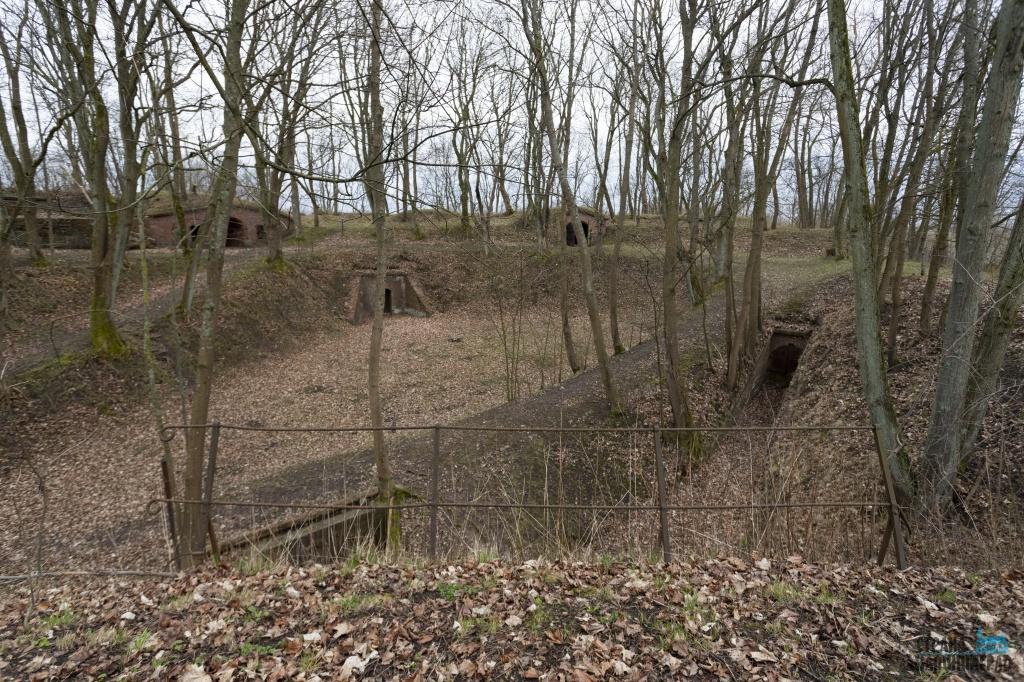