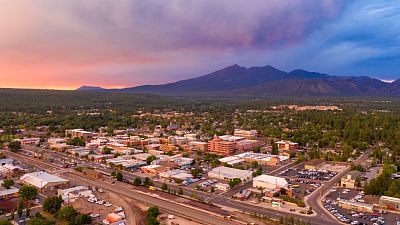 In the harsh, desert and enigmatic land of Arizona, in the American West, with an indubitable Spanish past, in the city of Flagstaff, one of the few inhabited for hundreds of miles around, still stands the last basque ball fronton, of the many that were in the State, constituted in 1912.

This fronton, made of sandstone, 40 feet high and partly beaten by the passage of time, still has the intact capacity to represent the past and the experiences of many Spaniards who, since the beginning of the twentieth century, dedicated their effort and, in good part, his life, to the work of livestock in Arizona.

Emigrants from different parts of the Peninsula who were hired to bring the old Spanish wisdom in dealing with sheep and drove a booming economy, the US, which was already at the forefront of the world.

The old walls of the pediment to which we refer are located on the street San Francisco de Flagstaff and once they were adjacent to a hotel, a guest house, founded in 1926 by the Spanish, Jesus Garcia; hotel, lodging house, which served, throughout the years that it was in service, so that numerous shepherds and Spanish ranchers were cared for.