View of the island of Five Paths from the roof of the bus 23. 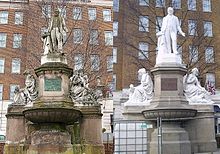 Five ways it is the area of ​​Central Birmingham, England. It got its name from a large traffic intersection, now busy. a roundabout (with a pedestrian subway through the traffic island) southwest of the city center, which is at the outer end of Broad Street, where the Birmingham Middle Ring Road intersects the start of the A456 (Hagley Road).

The name Five Ways dates back to 1565 when the roads leading to Harborne and Halesowen were registered as being there.[1] Mary Ann Schimmelpennink, who lived in the Five Ways until 1785, describes the origin of her name as a result of the place being the intersection of five roads.[2]

Five ways were alarmed in 1841, after disputes over the repair of the roadway in the area.[3] It was the former home of the School of the Five Ways of King Edward VI.[4] before he moved to his current location at Bartley Green. The Five Ways train station is located on the Cross City Line. It opened in 1884 to replace the Granville Street station and closed in 1944, reopening in 1978. The old station building has survived as offices on Islington Row. There are plans to extend the West Midlands Metro Light Rail system from downtown along Broad Street through the Five Ways Underpass and onto Hagley Road. [5]

On June 4, 1862, the Joseph Sturge Memorial (which originally had drinking fountains) was opened in front of a crowd of 12,000.[6] The sculptor was John Thomas, for whom Sir Charles Barry worked as a stone and wood carver for the former King Edward Grammar School in Five Ways. In 2006-2007. Partnership Birmingham Civil Society, Birmingham City Council and the Sturge family saw the statue restored for the 200th anniversary of the 1807 Slave Trade Act. On March 24, 2007, a civil ceremony was held during which the statue was officially consecrated; the Lord Mayor of Birmingham opened a board of interpretations detailing Sturge’s life. Statue class II listed.[7]

Buildings also located in Five Ways include: Philip Chatwin Lloyds Bank (1908-9) and the Marriott Hotel (formerly Swallow Hotel, and before that Pipeline Investment House), which was expected to receive a five-star rating when opened to compete with The Hyatt Regency on Broad Street; however, this was not achieved.[8] The building was built in 1957 by the Cotton, Ballard & Blow company.[9] Now it is level B. an architectural monument.[10]

Five Ways is a large commercial district in the heart of Birmingham. The area began to develop in the early 1960s when downtown Birmingham expanded west towards Edgbaston, along Broad Street and Hagley Road. Landowners Calthorpe Estates have launched various schemes to stimulate high-rise construction in the area and turn it into a business hub. One of the first events here was the Five Ways shopping center, over which the Auchinleck house towered.[11] It consists of a traffic-free plaza with shops on the ground floor, a covered market, a car park on the second floor and the 10-story Auchinleck House, named after Claude Auchinleck, with office space. Designed by J. Seymour Harris and Associates, it was completed in 1962.[11] There was a fresco on the side of Auchinleck’s house. Trevin Copplestone that was illuminated at night. It was removed, although another mural by this artist remained in the courtyard. Other developments in the vicinity of Five Ways include Five Ways House on Islington Row, designed by Cotton, Ballard & Blow, and the Birmingham Chamber of Commerce building, designed by John Madin.[12] Five Ways House was the seat of the Department of Public Building and Works library.[13]

See Also:  In the United Kingdom centers for mass vaccination against Covid

Other high-rise buildings that were built later include: 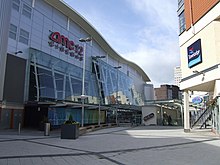 The Department of Labor and Pensions has branches in Five Ways. The former Birmingham Children’s Hospital site is now a Broadway Plaza entertainment complex. Built in the early 2000s, it was worth £ 80 million and is comprised of recreational, retail and residential space.[14] Nearby is the 12-inch screen Cineworld Cinema, which also has restaurants, clubs and casinos (Casino Grosvenor).[15] The latest developments were managed by Richardson Developments (responsible for the nearby Broad Street Tower) and cost £ 50 million. The listed inn at the corner of Bishopsgate and Tennant Streets, now known as “Bull’s Head”, has been completely restored as part of the development.[16] Its approximate total area is 18,580 sq. M.[17]

In 2012, it was announced that the developer SevenCapitalis working with Australian hotel chain StayWell Group to transform the vacant Auchinleck House office building into a 253-bedroom Park Regis hotel.[18] make it a brand first Regis Park hotel in Europe. Work began on the 2.3 acre site in 2014 with a contractor. Colmore Tang Construction was assigned to complete a £ 50 million project that would include the addition of a steel and glass sky bar and a rooftop restaurant to the existing building. The four-star hotel opened its doors to guests on Tuesday 29 March 2016.[19] In March 2016, it was announced that former Ivy Chef Des MacDonald would open a £ 3 million Japanese restaurant on the 16th floor of the Park Regis Hotel called Rofuto, which means attic in Japanese. This was supposed to sit next to the sake and cocktail bar Kurabu.[20]

In October 2017, SevenCapital received permission to build a 17-story, 228-bedroom residential complex called St Martin’s Place next to the Park Regis hotel. The hotel is slated to be completed in 2021 and will be the first and only Birmingham residence to offer hotel services to residents – directly from the hotel next door.

In 2014, developer SevenCapital announced the acquisition of No. 1 Hagley Road, also known as the Capital House, with the intention of converting the building, designed by John Madine, into 271 units under government-cleared building rights. All apartments are sold within five months after the purchase of the building by the developer.[21] Construction was completed in March 2016. In 2014, SevenCapital also acquired the Five Ways Broadway building from the Glanmore Real Estate Fund for £ 15m and has since redeveloped portions of the building into 250 units.[22]