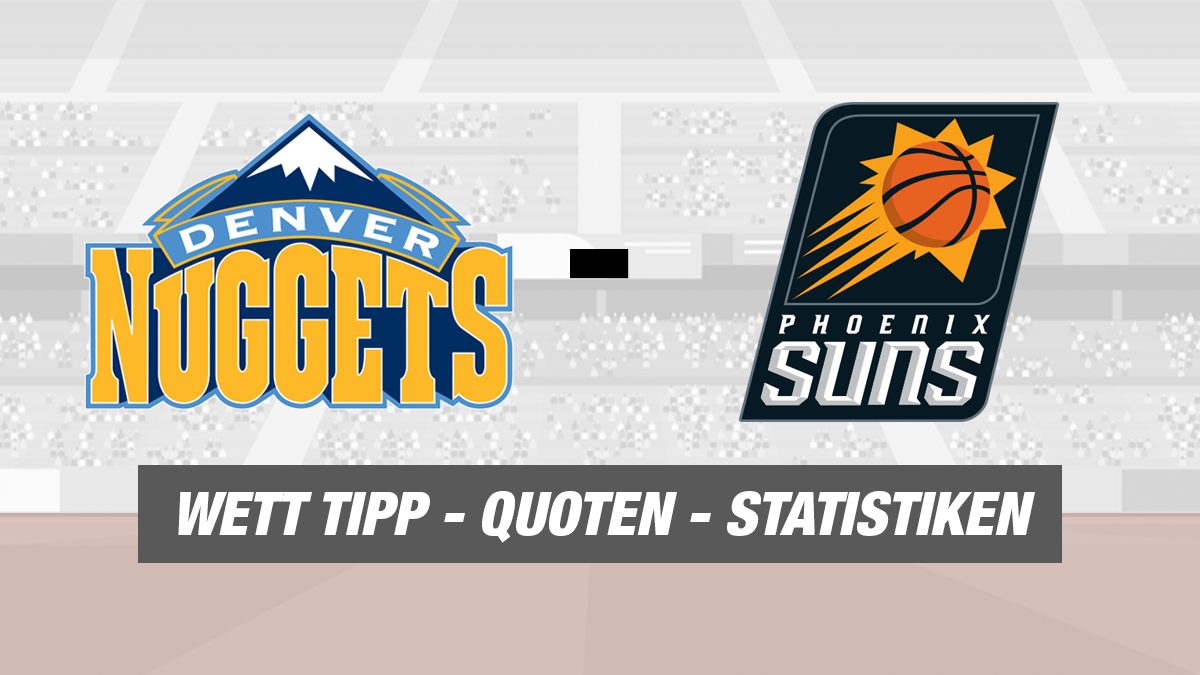 Anyone who bet that the Phoenix Suns would have such a strong season before the season started is probably rich by now. The team from Arizona was able to eliminate the reigning champion of the NBA with the Los Angeles Lakers in the first round and is now about to send the Denver Nuggets on vacation early. Because the Nuggets have so far been able to offer little resistance, so that after two games in Phoenix they are already behind with 0-2. How we rate the third game can be found in our Nuggets – Sun’s betting tip.

Game three will be played in the night from Friday to Saturday at 4 a.m. After two games in Arizona, the series is now moving to the higher Colorado in Denver, where the Nuggets now have two home games in a row. However, the team around the newly crowned MVP Nikola Jokic has to stretch a lot to have a chance in this series. Phoenix was clearly better in the first two games and was able to celebrate clear victories, Denver had no answer yet.

The nuggets could hardly hold a candle to the Suns in the first two games. Phoenix has shown itself to be the much better team so far and could make short work of it in this series. We believe that the Suns will also win the third game and thus bring about a preliminary decision.

The Nuggets saw absolutely no land in their second game against Phoenix on Wednesday. A single minimal lead at the very beginning of the game stands for Denver in the statistics, after which the Suns were dominant until the last siren. Especially in the second half, the result became more and more clear, in the meantime the Nuggets were behind with over 30 points. In the end there was a 123-98 swatter, which now puts the Nuggets under a lot of pressure in front of their home crowd in the third game.

But what is the reason for the sudden crash of the nuggets? On the one hand, the opponent makes it a lot harder for Denver than the Trail Blazers in the first round. The Suns are a much better defensive team than Portland and even get the freshly minted MVP Nikola Jokic under control. The Serb had over 30 points on average against the Blazers, in the second round it is 23 points per game so far. Furthermore, the Nuggets were able to hide their weaknesses better at both ends of the field against Portland, some of which were caused by various injuries.

The problems with the nuggets in the offense arise mainly from the injury-related absence of Jamal Murray. The Guard has been Jokic’s congenial partner in recent years and was able to relieve him by attracting some of the opponent’s defensive attention. But Murray is out even longer with a cruciate ligament rupture, which is why we no longer believe in a big offensive fireworks display by the Nuggets. We are therefore betting on less than 112.5 points for the team, which has so far achieved a maximum of 105 points in a game in this series.

Phoenix is ​​the surprise team this season. After a full eleven years of abstinence from the playoffs, the Suns are suddenly one of the league’s hottest title contenders. The transfers of the experienced Chris Paul and Jae Crowder have raised a talented but still very young team to a whole new level. After the Lakers, the Nuggets should now also feel that Phoenix was not the second best team in the regular season by chance. The Suns have taken home advantage and done their homework, now they have their eyes on the sweep.

Paul is in top form

Chris Paul is the absolute X-factor of the Suns this season and especially in the playoffs. First he played a big part in the team doing so well in the regular season. But now his influence is also becoming clear in the playoffs, because when he was clearly battered against the Lakers in games two and three due to a shoulder injury and could not bring his best performance, both games were promptly lost. But now he seems to be completely fit again, because in the first two games against Denver he has strong averages of 19 points and 13 assists, while he hits extremely efficiently and only owes a single turnover.

Even if the Suns now have to play their first away game, we don’t believe in a drop in performance. The Nuggets simply lack the defensive staff to stop the Sun’s strong and, above all, versatile offense. So far Phoenix has scored over 120 points in both games, so we are assuming at least 110 points in the third game.

There was good news in the last game for the nuggets. With Will Barton, a painfully missing player returned from an injury-related break and was right in the game with ten points. So it is easy to imagine that Barton will replace Austin Rivers as the starter in the shooting guard position in the third game in order to bring a slightly better defense onto the field. The Suns, however, still have no reason to change anything.