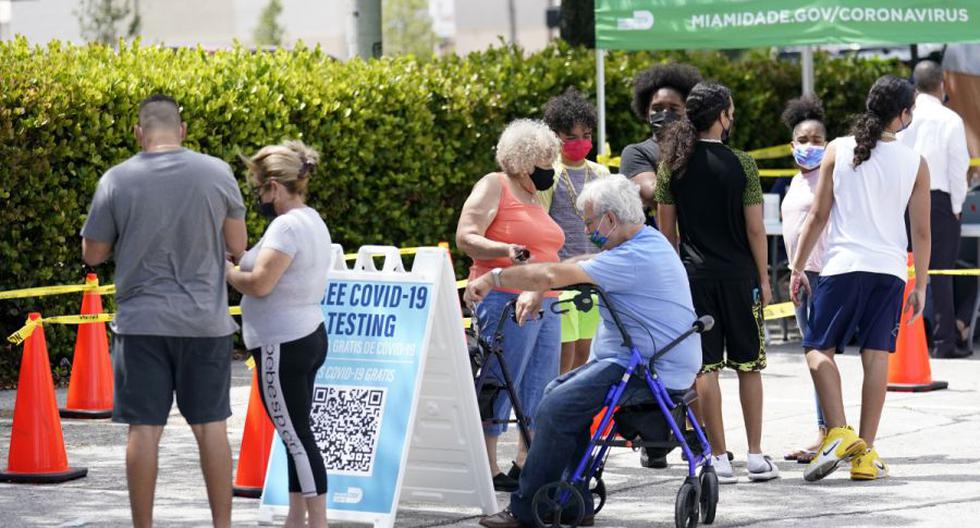 Authorities, hospital managers and doctors on Monday urged the floridians to recover the good ones “habits”From the beginning of the pandemic and to vaccinate those who have not done so, as the only way to stop the record increase in infections and hospitalizations due to covid-19.

Florida has become the center of the new wave of covid-19 on USA due to the rapid expansion of the delta variant and a stagnant vaccination rate.

The highest US health authority, Surgeon General Vivek Murthy, told CBS on Monday that he is “Deeply concerned about what is happening in Florida” and with the increase in cases in other parts of the country, in view of which it is urgent to increase the vaccination rate at the same time as monitoring the use of masks.

“What we are experiencing in the last 27 days is a dramatic increase in the number of hospitalizations”, The president of the Florida Hospital Association, Mary Mayhew, said in turn to the MSNBC chain, after it became known that on Sunday there were 10,207 people hospitalized for the covid-19 in the state.

The executive explained that Florida It took 60 days to reach the previous record (10,179 hospitalizations) in July 2020, before vaccines were available, while now it has broken the mark in 27 days.

“It is a younger population that is being hospitalized”Added Mayhew, to later highlight the rebound in cases in the urban areas of Jacksonville, in the northeast of the state, and in downtown Orlando.

See Also:  $ 75,000 grant to provide training and resources to Hispanic entrepreneurs in Florida

In fact, a Jacksonville hospital in the Mayo Clinic network exceeded the capacity of 304 beds authorized in its case for patients of covid-19, as reported by media in that city.

Mayhew said that more than 50% of those hospitalized due to covid-19 They are between 25 and 55 years old, something “Dramatically different from what we saw last year”, and 96% are unvaccinated people.

In Florida, only 49% of those over 12 years of age are fully vaccinated, either because they have received the two doses of Pfizer or Moderna, or the single dose of Johnson & Johnson.

Miami-Dade, the most populous county in Florida, with about 2.7 million inhabitants, has been the number one in cases and deaths throughout the pandemic and continues to be so today.

“We are at the top here in Florida and it is time for everyone to understand that it depends on us. We know what to do to stop the spread “Miami-Dade Mayor Daniella Levine Cava said Monday.

Specialist David Andrews, from the University of Miami, expressed to Efe his concern that this “A large group that is reluctant to get vaccinated” across the country prevent the decline of the delta variant, as seen in India and the UK.

Michel Teng, a virology specialist at the University of South Florida, opined that, without the entire population vaccinated, it is necessary to unite to return to the “habits”Of the mask and social distance.

In Miami-Dade, vaccination sites have in recent days seen an increase in people seeking their vaccine dose, as well as getting tested.

In the Tropical Park, where one of the largest testing centers of covid-19, which is accessed by car, there were about 30 vehicles in the early hours of the morning and more influx was expected at noon and after work hours.

At the other end of the county, in Brickell, a tourist and financial district of Miami, in one of the small test stands of covid-19 From the Curative company, there were half an hour after its opening, about fifteen people queuing up.

One of the employees dedicated to doing the swabs, who did not want to be identified, told Efe that they are receiving about 120 or 130 people per day in the more than eight hours that the small stall is open (from 9 a.m. to 5.30 p.m. ) the seven days of the week.

In that area, hotels and seasonal rental buildings abound and many of the people who were waiting their turn today were tourists, like an Israeli family, made up of a father, mother and three children dressed as for a day at the beach.

Nearby is a large supermarket of the Publix chain, which last week decided to require its employees to wear masks again, a measure recommended by the Centers for Disease Control and Prevention (CDC) that are being followed by Florida companies and institutions. .

THE STATE GOVERNMENT UNDER CONTROVERSY

Even after this Saturday was reached in Florida With 21,683 new cases, the state governor, Republican Ron DeSantis, continues to resist issuing an order for the mandatory use of masks and the requirement of vaccines by employers.

Amid the alarm, the senator for Florida Marco Rubio, also a Republican, pointed out this Monday on Twitter that there is a “hysteria”By the media regarding the covid, “Because ‘bad news’ sells’”.

“The real story here is how, for fully vaccinated people, the risk of serious illness appears to be close to zero,” added.

According to Johns Hopkins University, Florida It is the third state in the United States by number of cases and the fourth in number of deaths in the entire United States, which today is the country in the world most affected by the pandemic with more than 35 million infected and 613,000 dead since March 1, 2020.

According to the criteria of

What is and how is the Coronavirus that emerged in China transmitted? null

IT MAY INTEREST YOU