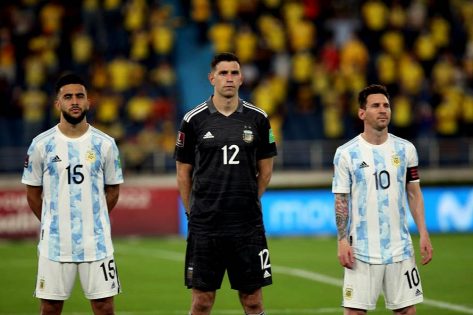 The two from Mar del Plata will play the international contest with the Argentine National Team. For his part, Emiliano Buendía was left out.

On the official page of the Confederation of South American Football Confederation (Conmebol) the list of 28 players who were summoned by the coach of the Argentina National Team, Lionel Scaloni, to dispute the America’s Cup 2021 in Brazil, in which there are two Mar del Plata, the archer Emiliano Martinez and the central Lucas Martinez Wednesday.

The Copa América begins on Sunday, which will be held in its entirety in Brazil, after the losses of Colombia and Argentina, and this Thursday was the deadline for the ten Latin American coaches to confirm the call with a maximum of 28 players. Regarding the last list to play the double playoff date, five players were “cut.”

Is that Lionel Scaloni had summoned 30 footballers who play abroad and others three in the country for what was the last double date of the South American Qualifiers in which the Albiceleste tied at home against Chile and in Barranquilla against Colombia.

As regards that list, five were the “cut” and they will not be at the Latin American event: it is about Mar del Plata Emiliano Buendía, who has not made his debut in the senior team yet, the winger / center back Juan Foyth, the exRiver steering wheel Lucas Ocampos, the central Jose Luis Palomino and the end of the Millionaire Julian Alvarez.

For its part, the Mar del Plata steering wheel Emiliano Buendía He first coached for the senior team after a great season at Norwich City where he was champion and promoted to the Premier League. Now he will have a few days of rest and then return to England but this time not to Norwich, as he did in recent seasons, but he will go to the city of Birmingham, where the Aston Villa club is based, a team that in the last hours closed a transfer that is around 38 million euros. There he will share a campus with Dibu Martínez.

Another novelty in this list of 28 players with whom Argentina will play the Copa América 2021 in Brazil is that there are four archers, an amount that is not usually mentioned but is given in the framework of the pandemic and also, thanks to the approval of FIFA and Conmebol, so that Franco Armani can travel to the neighboring country and compete in the contest even though his PCR swab still positive, reason why he could not play in the last double date of the South American Qualifiers.

An important fact is that after guaranteeing through a statement its presence in the controversial 2021 edition of the continental tournament, the Argentine Football Association (AFA) confirmed that The Argentine National Team will maintain its concentration in the Ezeiza field during the dispute, so he will arrive in the neighboring country one day before each meeting and will return to the country each time his commitment ends.

THE 28 CALLED BY SCALONI FOR THE AMERICA CUP

See Also:  The congressman of a cybersecurity subcommittee accidentally publishes his password

Copa América: Emiliano Martínez and Martínez Quarta, on the list of summoned by Scaloni