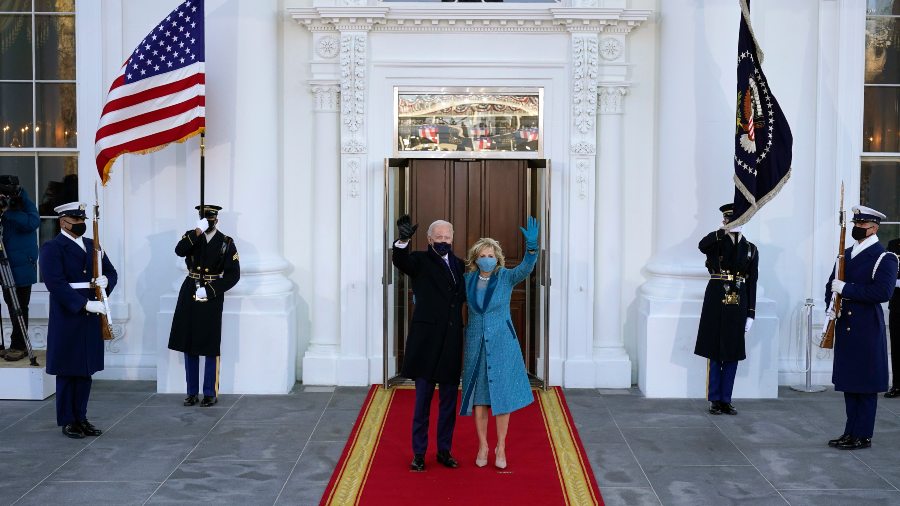 Despite the threats, the transition of power was smooth, emotional and without any shock.

Everything went as planned, nothing could interfere with the transfer of US presidential command. A strict compliance with the constitutional mandate that does not give space to power vacuums under any circumstances.

The forces of order and the State apparatus spared no resources or logistical and human efforts to fulfill the task and give the certainty that the world’s leading power preaches by example to the world.

Washington DC was isolated from the rest of the surrounding cities since 6 in the morning of this Wednesday. Some 750,000 residents of the District of Columbia were sheltered in their homes on a cold and windy morning, and the more than 25,000 military personnel from the armed forces, thousands of police officers and the Secret Service in coordination for the total control of the entire area that houses the federal government in the American capital, they were impassable.

Police in Arlington and Alexandria in Virginia and those in Montgomery and Prince George’s in Maryland also fenced off the main driveways for vehicles and pedestrians along the main bridges, and strategic access roads; the subway service that runs through the subway remained active, but with empty trains and all stops in the city center closed at least until the weekend when all fences and barbed wire are finished.

With the Commander-in-Chief, Joseph R. Biden, 78, sworn in at the edge of noon and his second in command, Kamala Harris, in office, the mission of the huge security deployment has been fulfilled and guarantees the continuity of the Government and the mandate of the 46th. President of the United States for the next four years.

The ceremony passed with the solemnity of the most important event for American democracy; In full, the arms of the government: Congress, Supreme Court and the heads of the Executive sat in the open air on the platform installed on one of the fronts of the Capitol overlooking the National Esplanade.

See Also:  U.S. has been hit by multiple tornadoes that have killed 5 people in a family of three

The select public invited to the ceremony barely covered a third of the front sector of the Capitol gardens with chairs that were spaced apart, the place where in previous inaugurations, or in ordinary times, the crowd of eyewitnesses of the solemn act began, with peaks of participation from up to 1 million souls gathered in the great democratic party.

The first images of Joe Biden in the White House

This time, on the metal platforms that in previous days were mounted by dozens of workers, most of them immigrants from Salvadorans and other Central American countries, and in the gardens they were decorated with more than 200 thousand flags, which moved with the effect of the wind that blew the plain. and they filled the void left by the absent souls, who at this inauguration had to settle for the television screens and the live signal transmitted to the country and the world by digital media.

The president-elect and vice-president-elect of the United States, Joe Biden and Kamala Harris with their partners, as well as some legislators at the entrance of the Capitol for the inauguration ceremony. Photo / AFP

The pandemic, which has already wiped out the lives of more than 400,000 Americans, of all age ranges and races: “fathers, mothers, children, friends, neighbors and work colleagues,” as President Joe Biden e qualified in his speech , did his part for this unusual, but unchanging ceremony of the world’s first power that has demonstrated its democratic robustness, and that the new president has pledged to defend it body and soul.

Another part of the closure to the public was due to warnings from the intelligence services that alerted that groups of extreme right-wing extremists, whom there has been no hesitation in describing as “domestic terrorism” and a strong threat to national security, had intentions to reach Washington DC to interfere with the constitutional mandate.

However, until Wednesday afternoon when President Joe Biden is already in the White House and the Vice President in the Executive Building to begin their work, life in the city has gone by without any shock.

Access for the press has had its setbacks these days, the restriction of spaces and the closure has prevented access to the areas, the public, the reactions that in other openings contribute greatly to the color of journalistic work on the ground are less.

A large part of the written press was given a space in Freedom Plaza, on Pennsylvania Avenue, several blocks from the White House and more than 2 kilometers from the Capitol, practically in an isolated space, surrounded by blocks and blocks of impenetrable fences. , and with no other public in sight than the military and the police.

The rite of power

However, the ceremony, as observed by political analysts, exceeded expectations due to the enormous symbolic charges with which it began on the eve of the day when the now president and vice president paid tribute to the more than 400,000 victims left by COVID-19 to the foot of the monument to Abraham Lincoln, the guardian who preserved the American Union during the Civil War, (1861 – 1865).

And how could it be otherwise, the images of the thousands of lights reflected in the pond overlooking the Washington Monument and the Capitol, with the new leaders alone, went around the world.