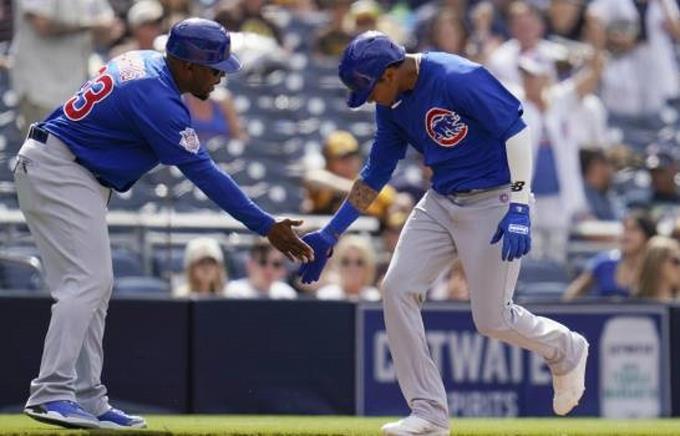 Joc Pederson and Sergio Alcántara hit home runs, and Jake Arrieta pitched five solid innings to guide the Chicago Cubs to a 3-1 win over the San Diego Padres and former teammate Yu Darvish on Wednesday night, keeping two of the three games. of the series.

Dominican shortstop Sergio Alcantara hit a solo homer off reliever Emilio Pagán. It’s his first home run of the season and the second in his two major league seasons.

The Cubs beat the Padres five times in six games over a 10-day span, including a three-game sweep at Wrigley Field last week.

Darvish (6-2) retired the first nine enemies he faced until Pederson hit a panoramic home run between right and center field to open the fourth inning and tie the score at 1-1.

Alcantara blew the wall off Emilio Pagán with one out in the eighth inning, his first home run of the season.

Arrieta allowed one run and four hits in five innings, struck out six and walked one. He ended up fanning three foes in the fifth inning after Victor Caratini had started the chapter with a single.

Rex Brothers (2-0) retired in order in the sixth inning for the win. Craig Kimbrel, who was a San Diego closer in 2015, pitched a perfect ninth for his 15th save in 17 chances.

For the Cubs, Sergio Alcántara 3-1 with one RBI and one scored. Venezuelan Rafael Ortega 3-1.

Brock Holt singled with two outs to end the game in the 11th inning and the Texas Rangers beat the San Francisco Giants 4-3 on Wednesday night for their second win in the last 14 games.

Holt hit a hit to center field off left-hander Jake McGee (2-2) after the Giants intentionally walked Isiah Kiner-Falefa to face the left-hander.

Nate Lowe, who hit a sacrifice fly as a pinch hitter in the 10th inning, started the 11th at second. There were a couple of flies before he scored the run that put the Rangers on the ground for the fourth time this season. Texas is 7-2 in extra innings and ended a 13-game losing streak in interleague play, equaling a major league record.

The Rangers tied the game at 2 in the ninth inning against Tyler Rogers, the Giants’ fifth pitcher. Kiner-Falefa opened the inning with a single, stole the second and scored on a weak hit by Adolis Garcia to right field.

For the Rangers, Cuban Adolis Garcia 4-1 with an RBI.

For the Giants, Colombian Donovan Solano 4-1. The Venezuelan Wilmer Flores 4-0. Honduran Mauricio Dubón 2-0 with one scored.

Mark Canha had two hits and produced two runs for the Athletics, and Jed Lowrie had three hits. The AL West leaders reached six wins in their last seven games.

The Diamondbacks extended their losing streak to seven. His string of road losses is the longest of its kind in the majors since 1985.

Manaea (5-2) extended his scoring streak to 15 innings. He struck out three enemies and gave away two walks to sign his second win in a row.

Oakland took a 3-0 lead in the second inning, in which Canha hit a two-run triple and scored on Lowrie’s single.

Arizona center fielder Ketel Marte came close to making a spectacular catch off Kanha’s hit, but the ball bounced off his glove as it hit the wall. The decision was confirmed after reviewing the replay.

Diamondbacks right-hander Matt Peacock (2-3) left the game with two out in the second inning after being hit by a hit to the hand. He received three runs with three hits.

For the Athletics, Venezuelan Elvis Andrus 2-0 with a run scored.

For the Diamondbacks, Ketel Marte 3-1. Venezuelans Eduardo Escobar and Asdrúbal Cabrera 3-0 each and Ildemaro Vargas 2-0.