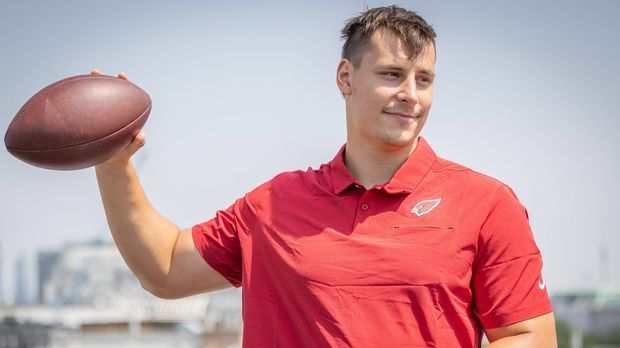 Munich / Glendale – There were special moments when Bernhard Seikovits sat on the plane and traveled to his future employer. “Even the landing was totally absurd. You are flying over the desert and suddenly there is a huge city,” he told “today”.

By this huge city we mean Glendale – the home of the Arizona Cardinals and therefore also of Seikovits.

The Austrian got into the NFL through the International Pathway Program. The 23-year-old was unable to influence the choice of team, but is still satisfied. “I think this is a very interesting team,” he said at the “Footballerei”.

“With Kyler Murray we have a young quarterback, the whole team is kind of young, including the head coach. I was happy that I was accepted by the Cardinals.”

Seikovits came from the offspring of the Austrian Vienna Vikings. He used to work as a quarterback and won the U-19 European Championship twice with the Austrian junior national team. He later acted as a wide receiver.

As part of the International Pathway Program, it was converted into a tight end. That means: He not only has to catch balls, but above all block, block and block again.

That doesn’t worry him: “I’ve always been a good blocker. I also enjoyed that as a wide receiver.” The first feedback was positive: “The Cardinals tight end coach said that he would make a blocking tight end out of me.”

Born in Vienna, he tried to get a place in the NFL through the International Pathway Program last year – but to no avail. The scouts found him too skinny.

This aroused his ambition: with a lot of strength training and an appropriate diet, he made sure that today he is 1.97 meters tall and weighs 120 kilograms.

“I just trained more and ate more than before,” he told the “Standard”. “Nevertheless, I can move well with the heavier weight. It doesn’t feel like 120 kilograms. I can keep up athletically.”

The Vienna Vikings supported their exceptional talent. In the league, they used him as a tight end in the 2020 season so that he could get the right scenes for his highlight tape.

Chris Calaycay, the head coach of the Vikings, praised his potential in an interview with “ESPN”: “He has a great feel for the ball, great catching hands and a great understanding of football.”

Seikovits first sniffed the NFL air in May when he took part in the Cardinals’ rookie minicamp.

“I’m always first in meetings and first in training, asking lots of questions. They test my learning curve,” he says. He describes the dealings as respectful: “You are not yelled at, the competition does not get out of hand.”

Austrians in the NFL: only the kickers prevailed

Austrians have had a hard time in the NFL so far. Only the two kickers Toni Fritsch and Toni Linhart were able to establish themselves in the best football league in the world in the 1970s.

In addition to Seikovits, two other Austrians are currently fighting for a place in the NFL.

Running back Sandro Platzgummer also came from the International Pathway Program and spent the 2020 season in the Practice Squad of the New York Giants. In April he received a regular contract, but has to fight for his place in the final squad in the pre-season phase.

Defensive end Thomas Schaffer joined the Chicago Bears as an undrafted free agent that year, but was added to the waiver list in June. Its future is uncertain.

This is a little different with Seikovits. As a participant in the International Pathway Program, he has at least one place in the training group.

But he is not satisfied with that. “I aim for the active squad. I try to compete with everyone here. I’m trying to get a role in the special teams and maybe become the second or third tight end. I’m really looking forward to the challenge.”

Do you want the most important NFL news, videos and data directly on your smartphone? Then get the new ran app with push notifications for live events. Available in the app store for Apple and Android.