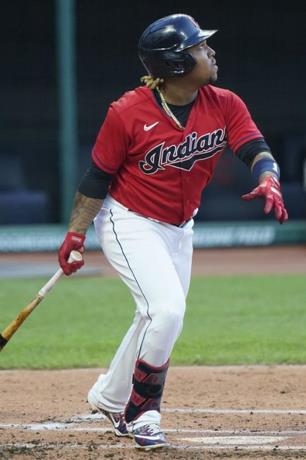 Brandon Crawford hit a homerun and drove in three runs and the San Francisco Giants beat the Diamondbacks 5-2 on Monday night, leading to Arizona’s 20th consecutive loss away from home.

The Diamondbacks came close to the infamous 1963 New York Mets record for consecutive road losses in the majors, conceding 22 straight away from the Polo Grounds.

Alex Wood (6-3) had his first win in five starts after allowing two runs and four hits in six innings in which he struck out seven. Additionally, he snapped a three-game losing streak with his first win since May 16 at Pittsburgh.

San Francisco closer Jake McGee pitched a perfect ninth for his 13th save.

For the Giants, Colombian Donovan Solano 5-2, with two runs scored.

The Indians’ triumph was overshadowed by the indefinite injury of reigning American League Cy Young Shane Bieber from a sore shoulder. Bieber was placed on the disabled list and will not take a ball for at least two weeks.

Ramirez drove in a run off Dean Kremer (0-6) in the first inning when Baltimore left fielder DJ Stewart slipped on the wet grass while going after a routine fly ball. The Dominican added an RBI double in the sixth inning after Orioles second baseman Stevie Wilkerson dropped a foul fly, giving him another shot at the plate.

James Karinchak came out of trouble in the seventh inning and struck out three straight opponents in the eighth inning after he walked his first foe. Emmanuel Clase retired in order in the ninth inning to reach 10 saves.

The start of the game was delayed an hour due to rain, but the Orioles couldn’t help but extend their losing streak on the road. Baltimore hasn’t won on the road since John Means threw a no-hitter in Seattle on May 5.

For the Indians, the Dominicans José Ramírez 3-2 with a double, two RBIs and one scored; Amed Rosario 3-0 with one scored. Venezuelan César Hernández 4-1 with two runs scored. Puerto Ricans Eddie Rosario 2-1 with an RBI; René Rivera 3-0. The Colombian Harold Ramírez 3-0.

NEW YORK (AP) – David Peterson pitched one-hitter over six innings for his first win in two months, and the New York Mets beat the Cubs at home for the first time in exactly four years with a 5-2 win over Chicago on Monday night.

Dominic Smith homered for the Mets, who snapped Chicago’s five-game win streak in the first of a four-game series between NL division leaders. New York scored all of its runs with two outs and ended a string of seven mishaps at Citi Field against the Cubs that began on May 31, 2018.

Peterson (2-5) was 0-4 with a 6.32 ERA in his last nine starts, including 0-2 with a 9.88 earned run in his four most recent appearances. But he only allowed the single in the third inning to Eric Sogard – whom he then retired with a twist to second – and a walk to Sergio Alcantara to open the sixth inning. The southpaw struck out three on an efficient 73 pitch.

Jake Arrieta (5-7) held the pitching duel with Peterson until the fourth inning, when Smith – in a 20-0 slump – singled for New York’s first hit. He advanced to second to walk Billy McKinney with two outs and scored on James McCann’s single.

Kevin Pillar followed with a two-touchdown double to left center field to extend the lead.

Smith blew the wall in the fifth inning and Pillar and Luis Guillorme walked back-to-back at-bats in the sixth before pinch-hitter Brandon Drury sounded an RBI single.

Anthony Rizzo and Patrick Wisdom hit back-to-back home runs off Trevor May in the seventh inning before Aaron Loup retired all four enemies he faced. Edwin Díaz reached 13 saves by striking out all three opponents in the ninth inning.

Tampa Bay put its mark at 43-24, a game and a half ahead of the White Sox in the fight for the best MLB record. The Rays have won seven of their last eight games.

Tampa Bay starter Tyler Glasnow left the game after four innings with a right elbow inflammation. The right-hander allowed two runs and three hits with one walk and six strikeouts while making 40 of his 53 pitches for strikes.

Tim Anderson had two hits and Brian Goodwin had an RBI single for the White Sox, who saw a four-game win streak broken.

The Rays bullpen, which went seven no-hitters in Sunday’s win over Baltimore, leads the American League with a 3.05 ERA.

Lynn allowed as many runs for just the second time in 12 starts. The right-hander entered the game with six consecutive won decisions and his 1.23 ERA was the second-best among major league starters, behind only Jacob deGrom.

For the Rays, Cuban Randy Arozarena 4-2 with one RBI and two runs scored.

For the White Sox, Cubans José Abreu 4-0 and Yasmani Grandal 3-0. The Dominicans Yermín Mercedes 4-0 and Leury García 3-1 with a double and a run scored.

working eight scoreless innings and the Colorado Rockies held on to a 3-2 win over the San Diego Padres on Monday night.

Gomber limited the Padres to three hits and did not walk. He has walked just four enemies in his last nine appearances. He also contributed a single on offense.

San Diego has lost 10 of its last 14 games and has only nine runs in its last seven losses.

Trent Grisham hit a two-run home run for the Padres in the ninth inning off Daniel Bard, who rallied to dominate Manny Machado and Fernando Tatis Jr. for his ninth save.

Gomber retired the first nine he faced before Tommy Pham opened the fourth with an infield single. Pham was later retired at the inning in a double play.

CJ Cron hit a solo home run in the seventh inning to make it 2-0.

The Rockies opened the scoring in the third inning against Dinelson Lamet (1-2) thanks to Trevor Story’s single with two outs. They widened the margin with Ryan McMahon’s RBI double in the eighth inning.

For the Padres, Puerto Rican Víctor Caratini 3-1. The Dominicans Manny Machado and Fernando Tatis Jr. 4-0 each and Dinelson Lamet 1-0.

ST. LOUIS, Missouri, EE.UU. (AP) – Tyler O’Neill broke the tie with an RBI double in the eighth inning and the St. Louis Cardinals beat the Miami Marlins 4-2 on Monday night to avoid a three-game sweep.

Adam Wainwright pitched six effective innings and Paul Goldschmidt had two hits and one RBI for the Cardinals, who posted their third win in 14 games.

The loss went to Dylan Floro (2-4), the fifth of Miami’s pitchers, who started the eighth inning with a walk to Dylan Carlson before Goldschmidt’s single. With one out, O’Neill hit his second double of the game to drive in Carlson.

Giovanny Gallegos (4-1) pitched a scoreless inning to score the win and Alex Reyes retired all the batters he faced in the ninth for his 17th save.

For the Cardinals, Puerto Rican Yadier Molina 3-1, with one run scored. Panamanian Edmundo Sosa 4-2, with an RBI.