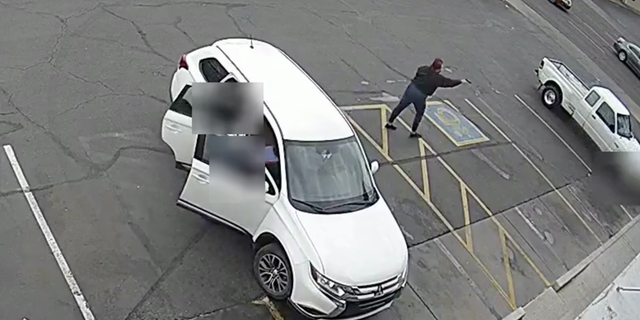 Surveillance footage shed new light on a dispute inside an Arizona Burger King that ended in shooting in March.

The alleged shooter, Dakota Kern, was in a car with three other people as the driver attempted to pick up a warrant from Postmates at the drive-thru, according to an arrest warrant.

Confusion about the order ensued, prompting Kern and other occupants to park the car and enter the Burger King, video obtained by FOX 10 Phoenix shows.

Kern accused the employees of using a racial slur, so he allegedly began grabbing items and throwing them at the employees inside the restaurant.

Eventually, Kern and the other people left the Burger King, at which point an employee came out to take pictures of the car’s license plate with a camera phone.

That’s when Kern allegedly grabbed a 9MM pistol and chased after a victim, firing multiple shots at the employee.

MICHIGAN BOY, 6 YEARS OLD, ALLEGED TRIPPED BY A NEIGHBOR WHILE RECOVERING THE BICYCLE

Dakota Kern allegedly fired multiple rounds at a Burger King employee as the victim attempted to take a photograph of a car license plate in March. (Glendale Police Department)

The employees ran back into the store for safety.

One of the bullets went through the rear windshield of a car across the street and stopped at the headrest of the driver’s seat, heading for the driver’s head. Another stray bullet also struck an unoccupied vehicle in a parking lot.

Kern, who was on probation at the time of the robbery shooting, was arrested in April on three counts of aggravated assault with a deadly weapon and five other counts.

He allegedly told officers that he “saw a black object” on the employee’s hand that he thought was a weapon.

“When [Kern] he faced the fact that he continued to pursue and shoot the victim while he was escaping, he admitted it and admitted that it was not reasonable to continue shooting, ”the arrest report states.

No one was injured by gunshots during the incident, but one of the employees received abrasions to the stomach.