For months, the RWDSU union has been fighting for access to the Amazon warehouse in Bessemer, a suburb of Birmingham in the state of Alabama. A prerequisite for union representation is that a section of the workforce declares a commitment to the union to the competent authority in Washington, the National Labor Relations Board NLRB. A vote will then be scheduled. If more than half of the employees vote for the union, the company is considered organized and the RWDSU could have started collective bargaining in the case of Amazon. Otherwise, union representatives are prohibited from entering the company premises and speaking to employees. Many unions respond by visiting workers and their families at home. However, the RWDSU refrained from such door-to-door visits due to the corona pandemic.

In December 2020, the National Labor Relations Board said there was “sufficient concrete evidence” to allow an election in the company, as it is believed that at least 30 percent of the workforce would vote for it. Amazon tried with all their might to prevent the vote, but failed with an objection to the labor protection authority NLRB. The Bezos Group was of the opinion from the start that no union was necessary, as the employees would already get everything they could stand up for.

From February 8th to March 29th, the voting of almost 6,000 employees took place in the form of a postal vote because of the corona pandemic.

After decades of defeats for the trade union movement in the USA, activists around the trade union RWDSU hoped to finally be able to set a breakthrough and a signal of renewal with a victory in the vote at the anti-union trade giant Amazon, and in the notoriously anti-union Alabama . In the USA the mood has changed. According to a representative survey on behalf of the AFL-CIO umbrella union, 77 percent of US citizens support the demand of the predominantly African-American and Hispanic Amazon workers in Bessemer for union representation. 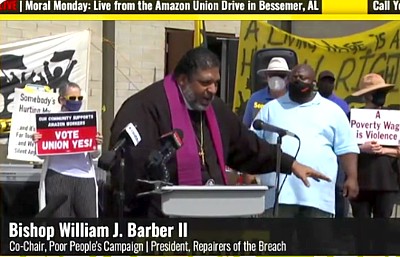 The RWDSU was not only backed by trade union organizations, but almost all of the prominence of left America. From the players union of the football league NFL and the unions of the AFL-CIO to well-known actors like Danny Glover to the former presidential candidate Bernie Sanders, who came to a pure rally in front of the factory gate. Even US President Joe Biden published a video message in which he – without explicitly mentioning Amazon – promoted the unionization of workers. The Black Lives Matter movement and the Poor People’s Campaign supported the union with a caravan to Amazon in Bessemer.

But on Friday, April 9th, it became clear that the project had failed. For the time being.

The final count resulted in 1,798 votes against and 738 votes in favor, with around 55% of the 5,867 workers eligible to vote casting one vote. Another 76 ballots were invalid and 505 were challenged. The contested ballots were not counted or opened because they would not have changed the outcome.

The union activists immediately made it clear that they would not give up. And now the RWDSU union is even making sure that because of Amazon’s illegal activities, “the NLRB will cancel the results and give the workers a second choice”.

As usual, Amazon ran a rigorous campaign against the union, aided by high-paid lawyers specializing in anti-union campaigns. In contrast to the RWDSU, the company had unrestricted access to its employees in the workplace – a great advantage. 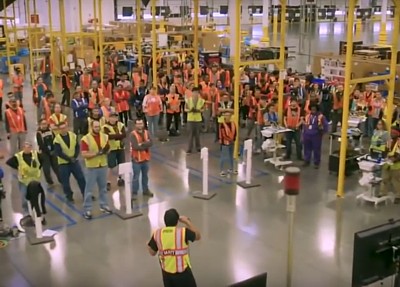 Employees were obliged to listen to lectures in which the company illustrated the disadvantages of union membership – among other things because of supposedly high membership fees and other disadvantages. Some of these events took place twice a week.

Amazon workers report that managers photographed the badges of workers who sympathize with the union. RWDSU attorney Richard Drouko reports that the union has received notices in which Amazon management “threatened to be fired if the union wins”. Amazon wrote to inform workers that the election ended March 1st – in fact, it ran until March 29th.

The company wrote on large posters on the factory premises: “Unions can’t do it. But we can.” There were even posters with similar statements in the toilets and in the canteen.

The campaign was also carried out on social media. Employees who were enthusiastic about Amazon praised the company and stoked fear of the union: “The union only wants your membership fees, you lose your wages and benefits.”

In a conflict in 2018, “AmazonFC” users first appeared on social media. The company admitted that they were employees who would be paid for their positive comments on the net. According to a 2019 report, they were given a day of paid vacation and a $ 50 voucher for the in-house market platform. In the conflict over the vote in Bessemer, the profiles are back. “AmazonFCGary”, “AmazonFCYola”, “AmazonFCDan” and what they are called were created in early March 2021, in the hot phase of the decision. Some of the profiles could be proven that they are not employees, but fake profiles.

Amazon even had the traffic light switch in front of the shipping warehouse changed to prevent car lines because of red traffic lights, which would have enabled the union activists to contact employees.

So far, so illegal, and so normal for Amazon.

But now the union can prove election rigging. Stuart Appelbaum, president of RWDSU, said the union will urge the National Labor Relations Board to “hold Amazon accountable for its illegal and outrageous behavior during the campaign.”

“The violations make it very likely that the NLRB will overturn the results and give workers a second choice.”
Richard Drouko, lawyer for the RWDSU trade union

Richard Drouko is even certain that “the NLRB will cancel the results and give the workers a second choice”. Amazon might still have won the union vote if it had played fair and decent. But it didn’t, so Drouko. 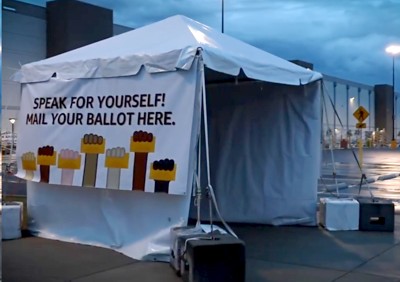 When the votes were counted, it was noticeable that 20 percent of all negative votes were cast in just two days, on February 12 and 17. On these days, during the night, Amazon set up mailboxes illegally on the company premises to cast absentee votes. The NLRB had rejected the application from Amazons for mailboxes on the company premises “because it would offer a clear possibility of intimidating the workers”.

Regardless of this, in the morning in the parking lot in front of the warehouse there was a tent with mailboxes with individually locked compartments and a mail slot, as is usual in apartment and condominium buildings. The mailbox had no US Postal Service marking. A banner on the tent read: “Speak for yourself! Throw your ballot here”. The union does not know who had the keys to the mailboxes: Amazon says only the USPS postal authority. The ballot papers arrived at the NLRB in large piles.

See Also:  Manuel Lizama, the author of murals in the Municipal Palace of Valladolid, Yucatán

“Although the NLRB has definitely rejected Amazon’s request for a mailbox for voting on the warehouse premises, Amazon felt above the law and still worked with the postal service to install one,” said RWDSU President Appelbaum. “They did this because it was a clear way of intimidating workers.” This illegal form of voting also helped the company to find out which employees support the union because they are less likely to vote on the company premises.

A role in this conflict is played by e-mails between employees of the United States Postal Service USPS in January and February, which show that Amazon urged the agency to install a mailbox on the company’s premises.

In another email, an Amazon manager tells her colleagues in Bessemer that “Amazon’s expected installation date for this collection box is February 7, 2021.” In an email dated Jan. 8, the manager also announced that a person whose name has been blacked out “at Amazon headquarters is happy to be kept informed of this progress [würde]”.

Amazon spokeswoman Heather Knox said the mailbox placement was meant to make voting easier and that the company has suggested a number of options to achieve this. “The RWDSU fought this at every turn and pushed for a purely postal vote, which, according to the NLRB’s own data, would reduce voter turnout,” Knox explained in a statement. “This mailbox – which only the USPS had access to – was a simple, secure, and completely optional way to make it easier for employees to choose, no more, no less.”

more about Amazon on kommunisten.de