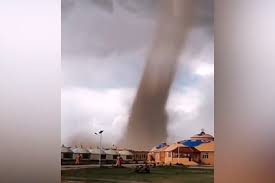 KIEV. May 15. UNN. In the Chinese city of Wuhan in Hubei province, a tornado killed 6 people and injured 218 others. This was reported by CGTN, writes UNN.

According to the district government, the tornado, which was 23.9 meters per second, broke through the Kaidian area in the evening, knocking down several barns on construction sites and cracking a large number of trees.

According to Hinhua, after the natural disaster, the leaders of the regional party committee and government officials arrived on the scene. They held emergency meetings to agree on an action plan to respond to emergencies.

Meteorologists have made a disappointing forecast: the probability of air funnels in the provinces of Jiangsu and Hubei remains. Locals need to be vigilant.