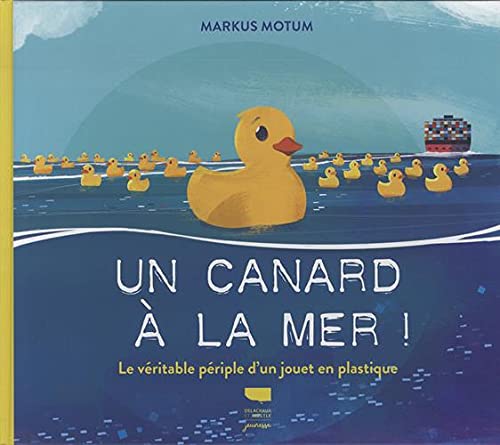 A duck in the sea – The real journey of a plastic toy, by Markus Motum – Editions Delachaux et Niestlé, May 2021 – 32 pages

In 1992, a container ship that left Hong Kong filled with toys spilled into the ocean during a storm, a whole container of 29,000 children’s bath toys spilled into the ocean: the beginning of an adventure full of adventures which begins for our plastic duck. Tossed across the oceans, swept away by the currents, it travels thousands of kilometers. Throughout his journey, this solitary hero meets fascinating animals, but also the many garbage that endanger marine life and the planet in general. Ten months later, the first toys appeared off the coast of Alaska, then in Europe and Hawaii. Some will travel more than 27,000 kilometers …

Will he be able to find his way back to dry land and how far his journey will take him?

These ducks became famous because they allowed scientists to model sea currents.

The motion, Markus and a British author and illustrator.